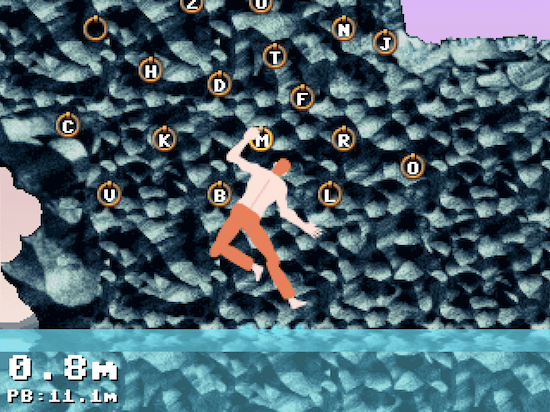 From the highly credentialed Dr. Bennett Foddy, maker of QWOP–a running game that many tout as the hardest video game of all time–comes GIRP, a rock climbing game that is similar to QWOP in mechanics, yet a bit easier, thus more fun to actually play. Dubbed “very loosely the spiritual successor to QWOP,” players assume the role of a rock climber and undertake the task of climbing to the top of a cliff, aiming for a bird’s nest at the top of said cliff, which apparently has “an awesome, amazing treasure hidden inside.”

The game’s mechanics are simple enough: Press and hold the key of the letter corresponding to the handhold you wish to grip, then press and hold either shift, control, or the left mouse button to flex the climber’s muscles in order to reach the handhold. Rinse, repeat, and try to avoid the rising tide and a pesky bird that conceals the letter of the occasional ring. There’s also a bit of risky maneuvering you can do, such as fiddling with the muscle flexing controls in order to get the climber into a sufficient swinging motion, so he can either reach distant rings, or even gain enough momentum to make a jump to an otherwise unreachable ring.

Personally, from my short session playing the game, I feel GIRP is a lot less difficult than QWOP, and I wanted to continue playing because it is actually kind of fun, whereas QWOP is so difficult that the challenge alone made me want to continue, though I wasn’t particularly having fun doing so.

Head on over to Foddy’s website and give GIRP a try.