Good Omens… Also Coming to A Screen Near You? 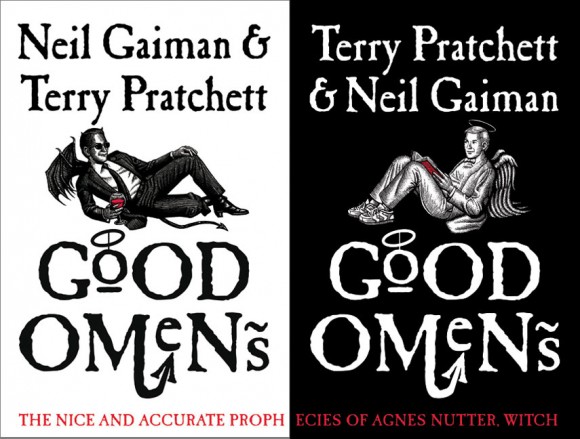 Hey, remember that new production company that’s making a cop show out of some Discworld books? According to The Hollywood Reporter they’re milking Terry Pratchett‘s career for at least one more concept: Good Omens. No, really!

First out of the stable is an adaptation of Terry Pratchett and Neil Gaiman’s novel Good Omens, scripted by Monty Python’s Terry Jones and Gavin Scott (Small Soldiers).

Note that this is the same creative team that’s putting together the Discworld adaptation. Could it possibly be the case that The Hollywood Reporter just made a typo and they meant to be talking about Discworld?

Could we actually be this fortunate?

Good Omens was a collaboration made early in both authors’ careers, a loose parody of The Omen where the Antichrist was accidentally swapped at birth, raised in suburban England, and doesn’t really much want to kick off the Apocalypse: he’s too busy playing with his friends and personal hellhound.

Seriously, Terry Pratchett, Neil Gaiman, and Terry Jones on one project. This totally makes up for Darren Aronofsky bailing on The Wolverine.

Let the casting of longtime celestial buddies, the angel Aziraphale and the devil Crowley; not to mention a witch, a couple of witchhunters, a possessed medium, and all four horsepersons of the apocalypse begin.