This is more than just a ship tease. 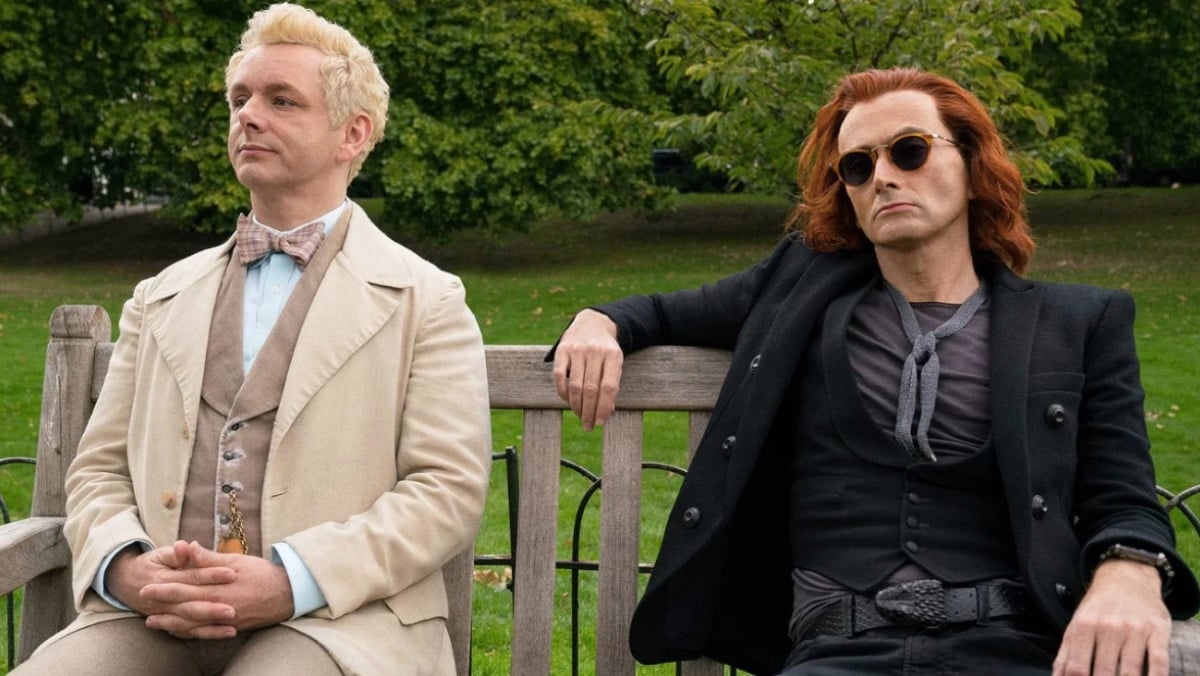 I finally had the chance to watch the Good Omens adaptation this weekend, after hearing about it for weeks as the Internet celebrated the series and the relationship between Michael Sheen’s Aziraphale and David Tennant’s Crowley. The show itself is brilliant, hilariously funny with a powerful message about the beauty of humanity, but I’d be lying if I said my heart didn’t belong to Arizaphale and Crowley and their relationship.

Going in, I was a little hesitant about exactly how far the subtext about their relationship would go. I’ve seen things with homoerotic subtext that merit the hype, and I’ve seen ships sail on the merit of being the two closest male characters who fandom deemed attractive. But there’s something more with Aziraphale and Crowley that goes beyond the basic shipping subtext; it is an honest to God (as voiced by Frances McDormand) love story, which the creators and the actors and the very text itself confirm.

First off, the idea of rebelling against the rigid dichotomy of your family (or, in this case, celestial group) for the person you consider your partner and best friend is a distinctly queer narrative. Found families are deeply important to queer writers, as the queer community serves as a found family for those who have been ostracized by their own families or by society.

Aziraphale and Crowley finding each other and a community there, and in turn rebelling against the expectations set by them by their respective orders, is a deeply queer narrative in and of itself. But the narrative goes out of the way to ensure that we understand just how deeply Aziraphale and Crowley respect and care for each other. The narrative does not so much as gently suggest this but rather drive it home in a flaming Bentley, because they are undoubtedly the heart of the piece.

There is no clever winking at the camera, no jokes at the expense of shippers. The pair are never referred to as a couple so they can react in disgust or deny it. The few times they are suggested to be a couple by others, they don’t have any sort of negative reaction at all. They never deny it, in point of fact. They unquestionably prioritize each other and are close, and there’s never any sort of desire to bring heteronormativity into it. There is no toxic masculinity present that means they cannot be openly affectionate or fond of each other.

For those disappointed in the lack of an actual romantic kiss between the pair, we’re talking about celestial beings who turn against both Heaven and Hell for each other. The text is there, even without a kiss. They are beings beyond Earthly ideals of PDA. There are also multiple readings of the pair’s relationship, including that both are asexual. A kiss wouldn’t necessarily work for all fans, and overall might not have worked for the show itself.

Perhaps better than that, we get Michael Sheen literally drawing from fanfiction to portray Aziraphale’s love for Crowley, and Neil Gaiman himself confirming they love each other beyond human labels of gay and straight on Twitter. The creatives and actors have thoroughly embraced the ship and the culture surrounding it, recognizing it as being deeply important to so many.

The story is uniquely queer in its own way, though I am hesitant to apply the label to someone else’s text. There is just Aziraphale and Crowley, who defy the usual labels put on characters and narratives. They are not queer-coded, as their relationship is too textual. They are not queer-baited, certainly. They simply exist in a deeply queer narrative, in which they prioritize each other.

Watching the entire six-episode series, it’s easy to see why so many queer fans have responded to the series so positively. It’s not the usual “we’ll hint at it but back away at the last second” narrative. It ends with the two at an intimate celebratory lunch while Tori Amos sings them off with a classic love song.

Their depiction has real power and impact, and Good Omens is a hugely important story of found families and love that isn’t able to be pigeonholed. It’s a miraculous little show, and as a queer fan I feel better having watched it and seen such a narrative portrayed with such respect. I tip my hat to Gaiman and all involved, and if Sheen wants to send me his favorite fanfic recs, I’d be much obliged.