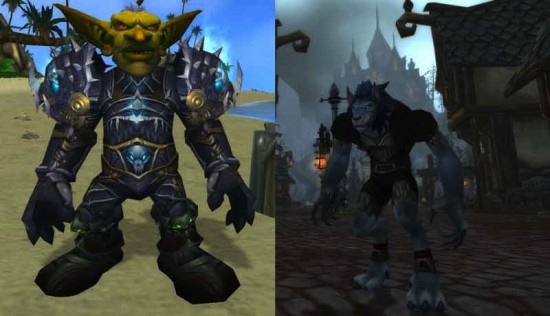 Some time on Wednesday afternoon, Blizzard gave players hungry for any kind of update on the latest expansion for their online obsession (present company included) a big gift: the opening beta testing for World of Warcraft: Cataclysm, and the lifting of the non-disclosure agreement that was binding all players of the alpha testing stage.

Now, we could probably go on for a while about the new features of the expansion, but any one who doesn’t play the game probably doesn’t care, and if you do, you should really be looking at others for your WoW news.  So we’ll just try to provide something that will be interesting to players and non-players alike: the sound files for the new racial emotes of Goblins and Worgen.

These are, for the uninitiated, the sounds that your character will make if you type either /silly (tell a joke) or /flirt (flirt) while in game.  They are specific to the gender and race of your character.

It should be noted that some of these emotes clearly won’t make it past the ESRB.  You might want to put on some headphones, or turn the volume way down if you don’t want those around hearing some jokes about sexual fetish. This is nothing new for a race/gender combination in WoW, female Draenei, for example, had no less than four /flirt emotes that didn’t make it into the final game.  Gives new meaning to the female Blood Elf /flirt “I’m the girl the ESRB warned you about.”

The Worgen videos repeat some jokes, presumably to show the difference in voice that occurs between human form and werewolf form.