Power your stuff with the power of the Sun. 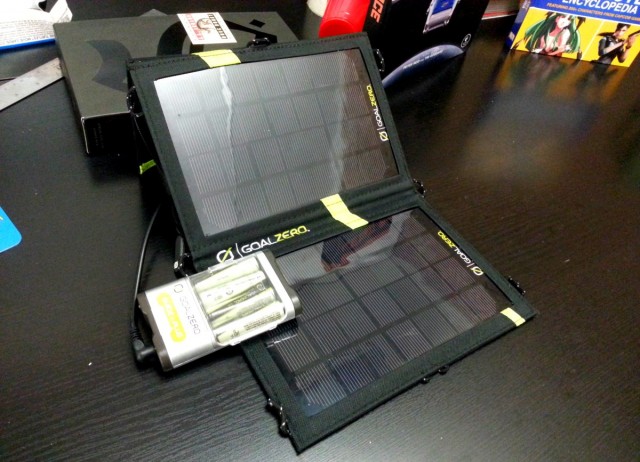 We’ve been testing out the Goal Zero Nomad 7 portable solar charger and battery pack for the past few weeks. If you’re thinking about buying a solar charger to power your electronics on the go, see what we thought about the Nomad after spending some time with it.

The biggest problem we had with testing the Nomad was that generally speaking, we’re indoor kids, and solar panels work best with sunlight. A few times we set the panel and battery pack out in the sun and left it for a while. As promised, the batteries were charged when we came back. How long the batteries took to charge relied on how clear of a day it was.

The user manual for the device said the battery pack they gave us should fully charge anywhere between 3 to 6 hours. We typically saw charge times on the lower end of that scale, even on days that were fairly cloudy. When it was fully charged we managed to get the battery of a Samsung Galaxy S3 up to about 60% from the single digits.

We took the panel out into the wild a few times as well. We attached it to a messenger back and charged the battery pack while we walked around Maker Faire New York. It was a bright day, but moving in and out of buildings and tents, and not always having the panel in the sun seemed like less than ideal circumstances, and we only managed to get about half a charge for the day.

Better results came when we took the Nomad camping this past weekend. Having the panel stationary and in a sunny spot works much better than trying to wear it on your person somehow, and in a place where electricity is harder to come by than we’re used to we appreciated the panel and battery pack greatly.

The Switch 8 and Guide 10 Plus are battery pack accessories you can get with the Nomad. Goal Zero sent us the Guide 10 Plus with our review unit, and we have to say that we found it incredibly useful. Apart from being able to charge from the solar panel, the Guide 10 can also charge four AA batteries from a USB port.

If you’re an outdoorsy tech geek we’d imagine keeping your devices charged is a constant struggle, and having a portable solar panel seems like a great solution to that problem. When you’re not using the Nomad, it folds in half with a mesh pocket in the back to house various cables and accessories. It ends up being the size of a small tablet and is very easy to stash in a bag.

The Nomad doesn’t seem to suffer from any problems not shared by any solar panel, namely that it really needs to be in the sun for best results. Solar isn’t always a viable option, but when it is we think the Nomad performed admirably.

We got the most use out of the Guide 10 Plus battery pack. It charges from the Nomad or a USB port, or in a pinch you can replace the rechargeable batteries with fresh ones and power a device off of that. If you don’t think you’re outdoorsy enough to buy a Nomad 7 solar panel for $79.99, you can still pick up the Guide 10 for $39.99. That’s a little more expensive than some other backup battery packs we’ve seen, but it seems versatile enough to warrant a bit more cash.

(via Goal Zero, image my own)