What’s the point of political commentary without flaming unicorn impalements? Luckily, we live in a world where we don’t have to worry about that, because Moneyhorse Games is developing Glorious Leader!, in which Kim Jong Un makes that and so much more a reality.

The game is a Contra style “run ‘n’ gun” that features North Korea’s supreme leader Kim Jong Un dispatching what appears to be a future American invasion with all the powers you’d expect him to have after listening to his propaganda machine. He wields machine guns, rides the aforementioned flaming unicorn, teams up with bestie Dennis Rodman, and even has his own narwhal—the unicorn of the sea.

Moneyhorse is riding a fine line of satire here, where they run the risk of trivializing the very real issues in North Korea’s dictatorship. They’re aware of that fact, though, and the game is definitely intended to make a statement with its satire. Jeff Miller, CEO of Moneyhorse Games, said they want to “carefully walk the line of satire without being an apologist for the regime,” to The Guardian.

They are definitely committed to the comedy and satire, though. They insisted in an email to The Daily Dot that the game is 100% serious and that they’ve been tapped by Kim Jong Un himself to tell this grand tale, saying they “did not choose to make a project about North Korea, we were chosen,” and that making the game was the “chance of a lifetime to bring light to the West from his Holiness’ eternal flame.” 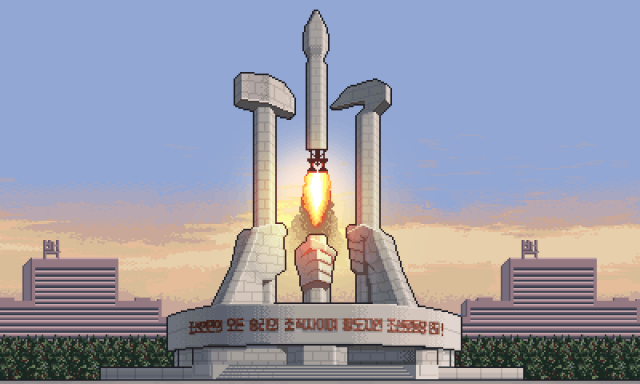 Sadly, there’s no firm release date for when you can get your capitalist pig hands on this masterpiece, but the game is “coming soon” to PC and mobile platforms.

(via Time, images via Glorious Leader!)