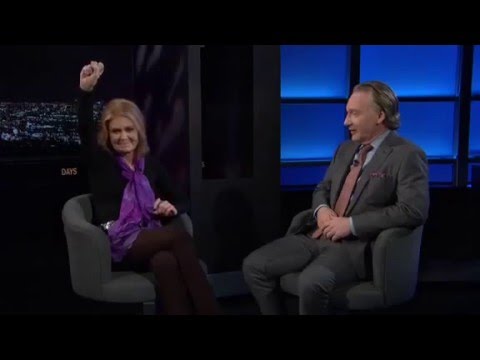 For a majority of the weekend, I noticed the video of Gloria Steinem’s recent interview with Bill Maher floating around my social media feeds.

It was being shared with disappointment over some sexist comments she made about female Bernie Sanders supporters, even after she had just finished talking about how politically active and feminist women these days are. Those comments have been rightfully pointed out and examined (and for the record, I think the idea that women who support Sanders are making an inherently anti-feminist choice is just ludicrous). While I normally don’t touch anything related to Bill Maher with a ten foot pole, because he’s The Worst, I watched the segment because I’d always admired Steinem as a feminist activist, and I wanted to judge for myself how bad her comments were.

Mmmmyeah. They were pretty bad.

However, I noticed that not one person who shared the interview to criticize it even mentioned the glaring (and completely out of left field) moment of cissexism shared between Maher and Steinem. It starts at around 4:54 (Trigger warning if you don’t wanna hear some cissexist buuuuuullshit):

So, completely out of the blue, Maher reduces Caitlyn Jenner to “a woman with a dick” just to make some stupid joke: “there’s no rules anymore” (Here’s a rule: Don’t be an asshole). This is compounded by Steinem contributing by talking about Martine Rothblatt, who is the highest-earning woman in the country, and saying that “the highest paid female in the corporate world, too, was a male previously, so….I mean, pffft” and then she shrugs and gives Maher this knowing look like “whaddaryagonnado?”

I wanted to throw things at my screen.

And I also didn’t know what upset me more, that these two made these comments, or that no one in my social media feeds was even bringing it up as another example of Steinem’s incomplete and outdated feminism. I suppose I shouldn’t be surprised – after all, trans issues are all too often erased from mainstream conversations about feminism (and just about everything else) — but I am hugely disappointed that something so blatant would go completely unremarked upon.

So, I’m remarking on it. And I’m making it known that, as a cisgender person, it pains me to see this kind of transmisogyny happen shamelessly, almost casually. But I can’t even call it casual, because Maher brought it up very pointedly just to have an opportunity to reveal his cissexist views, and Steinem didn’t push back against his statement; instead, she knowingly and consciously went along with him. What’s more, to have it happen between two people who have such large platforms, and could be doing so much more good for the world! While I have zero respect for Maher (see above, when I called him The Worst), I will always respect Steinem’s work for the cause of feminism. But she’s consistently gotten it wrong on this score, and we shouldn’t be blinded to bigotry from her or from any other leader or role model.

Worse than all that, I’m disappointed to have seen none of my fellow progressive, feminist, cisgender cohorts on social media even think to bring it up as A Thing. It pains me, not only because I hate to see feminism leave certain women out, but also on behalf of my trans friends and my trans fiancee. I think about the fact that though this one moment stood out to me, I can only imagine the things I don’t notice. There’s a constant barrage of hate and fear that trans people deal with all the time, and that is allowed to go on, because no one says anything.

Well, I’m saying something. And I hope that you all will, too.