Sousa's moving up in the world!

Production’s begun on #Marvel‘s #AgentCarter Season 2 and we’ve got your first look from the set! pic.twitter.com/ny2e0v1i6x

We’ve got a couple of new Twitter photos giving us new tiny glimpses into two of the most anticipated returning Marvel shows! The above is from ABC’s Agent Carter, which just started production on Season 2. Apparently, our favorite (male) agent, Daniel Sousa (played by Enver Gjokaj) is moving up in the world and is now the chief? After what happened to former chief, Roger Dooley, we knew we’d be getting a new one. But…well, this probably isn’t going to sit so well with Chad Michael Murray’s Agent Thompson.

Meanwhile, over at Netflix’s Daredevil, production is under way for their Season Two, and Jon Bernthal, while depriving us of a view of him as Punisher, just can’t help but share a glimpse of all the Punisher’s weapons!

Well, it’s good to know that the weapons will be true to form: 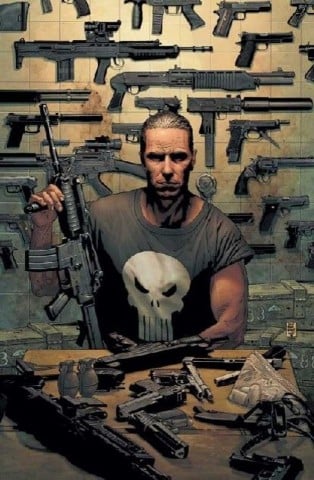 What do you think of these new lil’ tidbits? And which show are you most excited to see return?