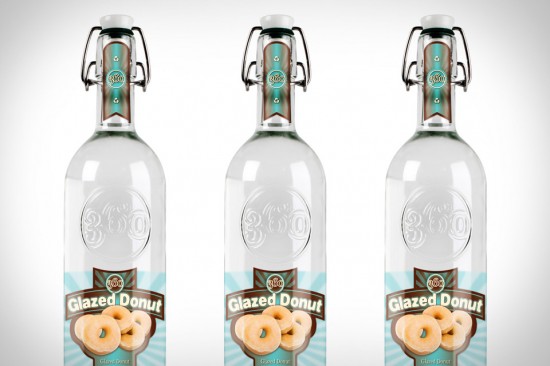 If I had a nickel for every time I was sitting in a Krispy Kreme and thought to myself,”You know what this donut could really use?Hard liquor!” I might have enough to buy a bottle of 360 Vodka’s Glazed Donut-flavored Vodka. Rise, shine, and say,”Nostrovia!”

Nothing beats a nice double shot of vodka in the morning. It’s a true American joy to turn off your alarm and then reach for the bottle of Smirnoff you left on your dresser the night before. There’s just one thing wrong with this picture, and it isn’t the fact that it’s a Tuesday and you have to be at work in 45 minutes. It’s that you’ve got to have your morning donut! How are you gonna fit it in with the 4 beers, 5 bong hits, and 2 more shots you plan to have? Ladies and gentlemen, I’ve got some good news! Vodka 360, the producers of such flavored vodkas as “360 Cola” and “360 Double Chocolate” have found the answer to all your worries. Presenting: “360 Glazed Donut!”

This is truly an innovation on par with the bacon sundae and the tactical coffee mug. I’m sure many of you are screaming, waking up the neighbors, “Sweet Odin! Stop the banter and tell me where I can get this!” Well, ladies and gentlemen, the fine folks at Uncrate.com are offering this magical product for only $16, roughly $10 dollars cheaper than buying your donuts and vodka separately! But remember, always enjoy your donut vodka responsibly by balancing out your breakfast with Maple Syrup Vodka and, of course, Bacon Vodka.

relevant to your sloshed interests