Oh, the Places You’ll Go With GISHWHES: A Love Letter From a Fan to the Greatest Scavenger Hunt Ever 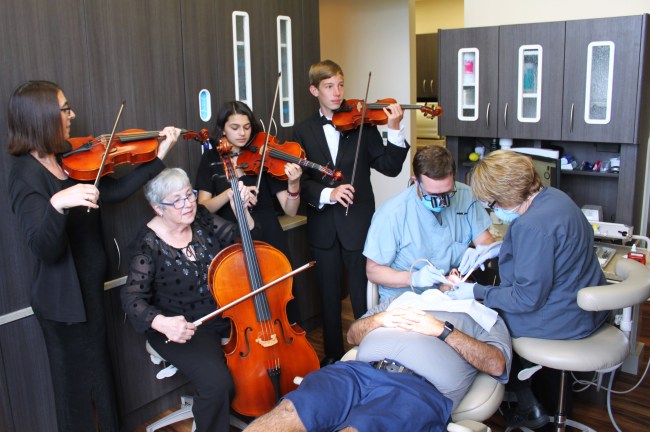 Four years ago, my summer plans were simple: maybe a vacation, work in the garden, see some friends and get some sun. But since 2014, the first week of August has turned into something … a bit different. It still involves food, but usually I’m wearing it. My time in the pool might be spent in an evening dress, and I might still find myself with friends, but it’s likely we’re doing something like chasing a goat around rural Oregon with a plate full of green eggs and ham. Or maybe we do something more subdued, like staging a paper boat race in a fountain or organizing a public water balloon fight. This is because my summer highlight is GISHWHES.

Created and masterminded by Supernatural star Misha Collins, GISHWHES stands for the Greatest International Scavenger Hunt the World Has Ever Seen. Collins saw the potential in the beautiful weirdness and devotion of the Supernatural fandom and created something even weirder that truly tested the lengths of participants’ devotions. Over the course of a week, teams of 15 people compete to complete as many items as they can from a list created by Collins and his compatriots. Items are submitted via photo or video and can range from simple acts of kindness—like beautifying a spot in your neighborhood or visiting a veteran’s center with donations—to the weird, like creating a functional lute from lutefisk (which IS as disgusting as it sounds and had my team cursing Collins’ name for many hours). Some items are out of this world–literally. GISHWHES has a mountain named after it on Mars and saw several children’s messages to the universe sent to space last hunt. 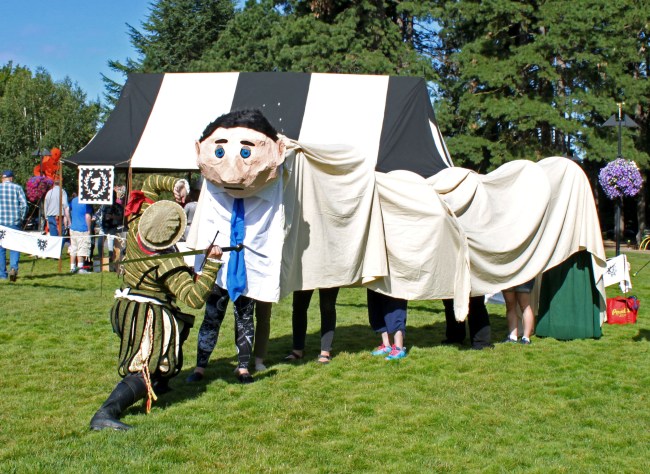 Last year, teams were asked to create a festival dragon in the image of Collins’ Supernatural character, Castiel.

Teams can be competitive or just for fun, and last year my team chose to be competitive. Members took the week off work, some of us had relatives come in to watch our kids and the garage a few of us used as headquarters became a new home (or maybe a prison) for us for the duration of the hunt. The beauty of GISHWHES is that players can do as little or as much as they want, maybe one day spent covered in jam on a street corner with a “free hugs” sign is enough for you, or maybe you’re strong of heart and spirit and you’re cool with leaving daily voicemails at NASA. By the way, I can tell you from personal experience that the best way to wash off jam is with a garden hose, and NASA never calls back.

I’ve done GISHWHES for three years, now going on four, and each year it’s been a crazy, messy, hysterical and enlightening experience each time. Last year my team (Trash Brigade) was a runner up, and I am incredibly proud of that. Collins has spoken at length about how the goal of GISHWHES is to spread chaos and creativity and to show how kindness and weirdness can be fun. That’s simple to say, but it means a lot more when you’ve been in the belly of the annual changing hybrid mascot beast (this year it’s a porcupanda). Doing GISHWHES taught me things I didn’t even know I needed to learn.

Now, as you may guess, I’m a nerd. The closest I ever got to sports was hanging out with the band at football games in high school. So, maybe there was stuff I missed out on. Even so, the thing that touched me most about that first year in GISHWHES was the absolute joy of being part of a team. Many of my teammates were people I didn’t know before the hunt, but suddenly we were all together on this crazy thing, and when they succeeded at an item across the country, it made me so proud and elated. Even beyond being part of the team, it was amazing to experience something so crazy and unique with thousands of people around the world. 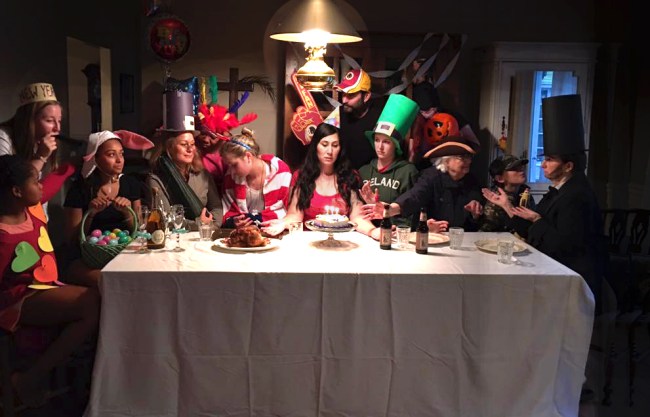 An image of all the holidays gathered for a meal.

Last year, I formed a team with several friends I had made through Supernatural fandom. We had a few open spots, so many of us invited people we knew were cool and ready to play hard. I can say, without irony or exaggeration, that my teammates are now my best friends and some of the most inspiring and wonderful humans I have known. GISHWHES is intense and crazy and left me crying over hot glue not working on fruit leather, but in the end, it becomes something bigger.

We nerds are solitary folk. Sure, we gather at conventions and talk online, but even in those spaces, we can be alone in many of the ways that matter. Doing something like GISHWHES requires that you rely on others as well and support and encourage them. It takes a lot of trust to tell your friend, “Just hold me under water so I can take this picture without floating to the surface,” or to help them sneak onto a train in a Victorian dress. She ended up looking lovely, by the way. 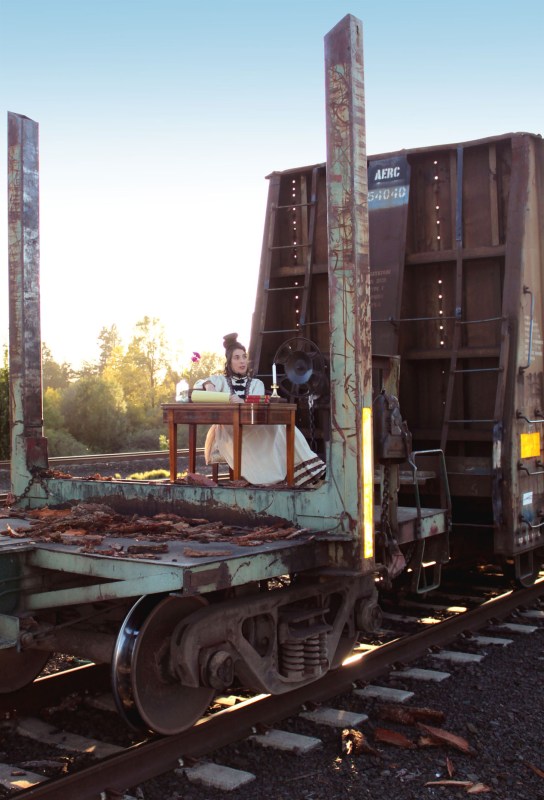 GISHWHES forces you to reach out and ask for help outside your team. The amount of Facebook posts I made asking, “Does anyone have access to a goat, a drone, or contacts at NASA?” might have been embarrassing, but it brought silliness and fun to my friends and family. It’s amazing how people will just nod and smile at when you say, “Well, it’s for a charity scavenger hunt,” when you’re getting a pedicure dressed as a stormtrooper or crashing a renaissance reenactment group’s joust with a 12 foot long festival dragon made to look like a trench coated angel of the Lord.

Everything I’ve mentioned so far, by the way, is something I or my teammates have done. The memories of GISHWHES are a prize in and of themselves. But so, too, are the fantastic things GISHWHES has been able to accomplish: families reunited, loneliness eased, bone marrow registered, hugs given and joy spread. I don’t think there’s any item more moving than one from last year where we were asked to fundraise for a family of Syrian refugees who were facing the worst circumstances. The item was added halfway through the hunt and required each team to create a Crowdrise fundraising page in order to secure a certain amount of donations. The caveat was no donations could come from the team—they had to be from others. Not only did GISHers blow past the fundraising goal for one family, we raised money to completely change the lives of three families. This year, for every person that registers, GISHWHES is buying an acre of threatened forest in Nepal.

It’s amazing to know that I have the best friends I’ve ever known and have had a hand in changing and saving lives all because I started watching a TV show a few years ago and later decided to do a weird scavenger hunt for the slim chance of going on a trip with one of the stars.

Collins has announced that this will be the last year of GISHWHES as we know it, but there are still a few days left to register if you’re interested in one of the weirdest weeks of your life. Though the hunt may not be the same next year, the legacy of GISHWHES, both in weirdness and the bonds it has helped form will go on for many years to come. Collins also promises a world of weirdness to come.

Fandom is fantastic. We forget that sometimes. When the world is full of cruelty and hate and everything seems dark, finding a reason to laugh or do good seems impossible. It’s not. When people join together in celebration of weirdness and kindness and each other, nothing is impossible—even making a darn lute from frozen fish.