Giraffes Can Swim! - Naish And Henderson Study | The Mary Sue 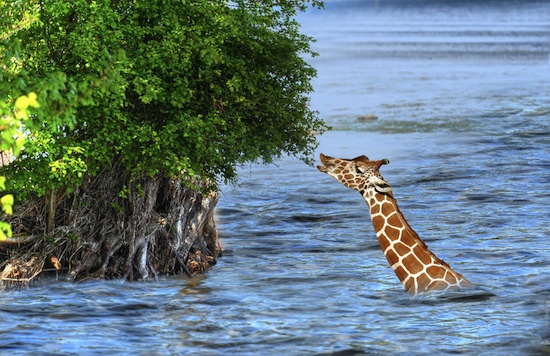 It used to be widely believed that giraffes were incapable of swimming on account of their odd, unwieldy shapes and observed behavior in the wild. While they have been known to wade in shallow water, as in the picture above, they haven’t been filmed truly swimming, and according to common lore, they often avoid water when possible.

Well, animal researchers Darren Naish and Donald Henderson have brought the light of science into the darkest caverns of ignorance, and in what Naish calls “One of the most significant papers ever published in the annals of science,” they’ve overturned established dogma. Yes, according to computer simulations, giraffes can swim. At that, they’re probably pretty bad at it.

Creating a digital giraffe involved numerous calculations on weight, mass, size, shape, lung capacity and centre of gravity. Calculations were made to discover rotation dynamics, flotation dynamics and the external surface area of both a giraffe and – for control purposes – a horse.

The authors found that a full-sized adult giraffe would become buoyant in 2.8metres of water. Giraffes can wade across bodies of water that are shallower.

But after becoming buoyant, a giraffe would be unstable in the water due to its long, heavy legs, short body and long neck.

The unusual shape of the giraffe meant that it floated in a peculiar manner, with the long front limbs pulling the body downwards. This forced the neck to be held horizontally and mostly underneath the water surface, so the animal would have to hold its head upwards at an uncomfortable angle. 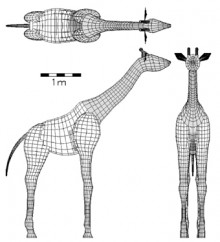 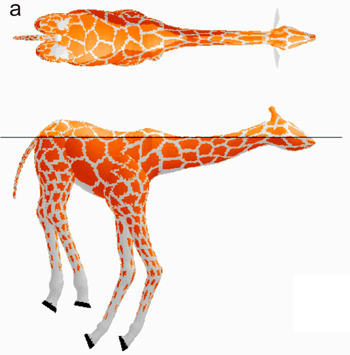 Conclusion: Giraffes can swim, they’re probably really bad at it, and this may or may not have some implications with respect to their biogeography.

Now, lest you rail against the decadence and foolishness of scientists, Naish, who blogs at Tetrapod Zoology (from which the computer images above come) has a response: “it isn’t widely realised how much work scientists do FOR FREE and FOR FUN, IN THEIR SPARE TIME.” Lots more entertaining and in-depth explanation of his and Dr. Henderson’s research at Tetrapod Zoology.

(Tetrapod Zoology and Telegraph via Fark. Title photo via Shutterstock.)