Gilmore Girls: White Show, Or the Whitest Show Ever? One Tumblr Leads the Investigation

A Year In the Life of tokenism. 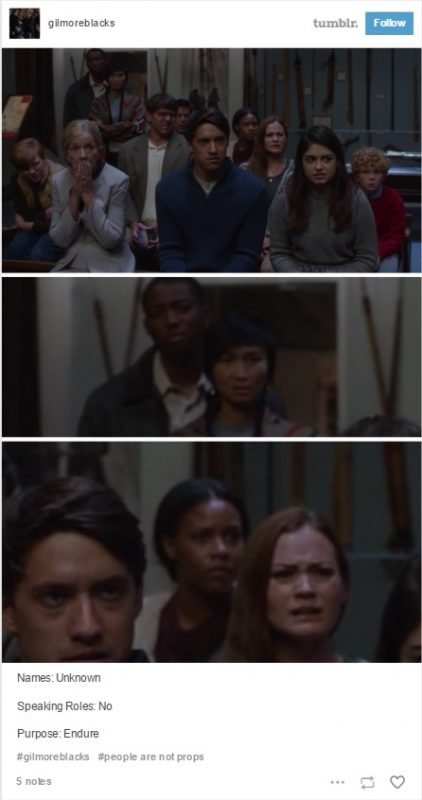 Much though we love Gilmore Girls, a major flaw that’s been commented upon since the show first aired is that Stars Hollow is so dang white. Despite supporting roles held by people of color like Lane Kim, Miss Patty, Gypsy (itself a racist name!), and Michel Gerard, there generally weren’t many people of color on Gilmore Girls. Black people in particular. Gilmore Girls has sort of tried to remedy that in Netflix’s A Year In the Life, it being 2016 and all, and one very thorough Tumblr user has decided to investigate whether things have changed in the intervening years. (Spoiler alert: not really.)

If you visit Gilmore Blacks on Tumblr, created and curated by writer Rahawa Haile, you will be introduced to Stars Hollow’s new black residents up close (zooming in is often the only way you’ll see them in the background) and personal (if they’re the lucky few to have lines). At the bottom of every entry, you’ll see a space for a name, whether or not the person/people in question spoke at all, and what their purpose was in the scene.

Hilariously, all of them seem to have the purpose to simply Endure. Endure being the token prop a production relies upon rather than creating actual supporting roles for black actors.

You should definitely check out the Gilmore Blacks Tumblr the second you have a moment, as it is funny, and hilariously thorough.

Meanwhile, studios and production companies should consider that casting diverse background actors is only one part of the inclusivity equation. The other part is providing speaking supporting and lead roles for performers of color. I don’t even know if there’ll be more Gilmore Girls after A Year In the Life, so all of this might be moot, but if we ever do return to Stars Hollow, the place where they need the most help is in recruiting and using black actors for roles where white might be the default, but is not necessary.

(via Vulture, image via screencap)