I love Halloween so much. 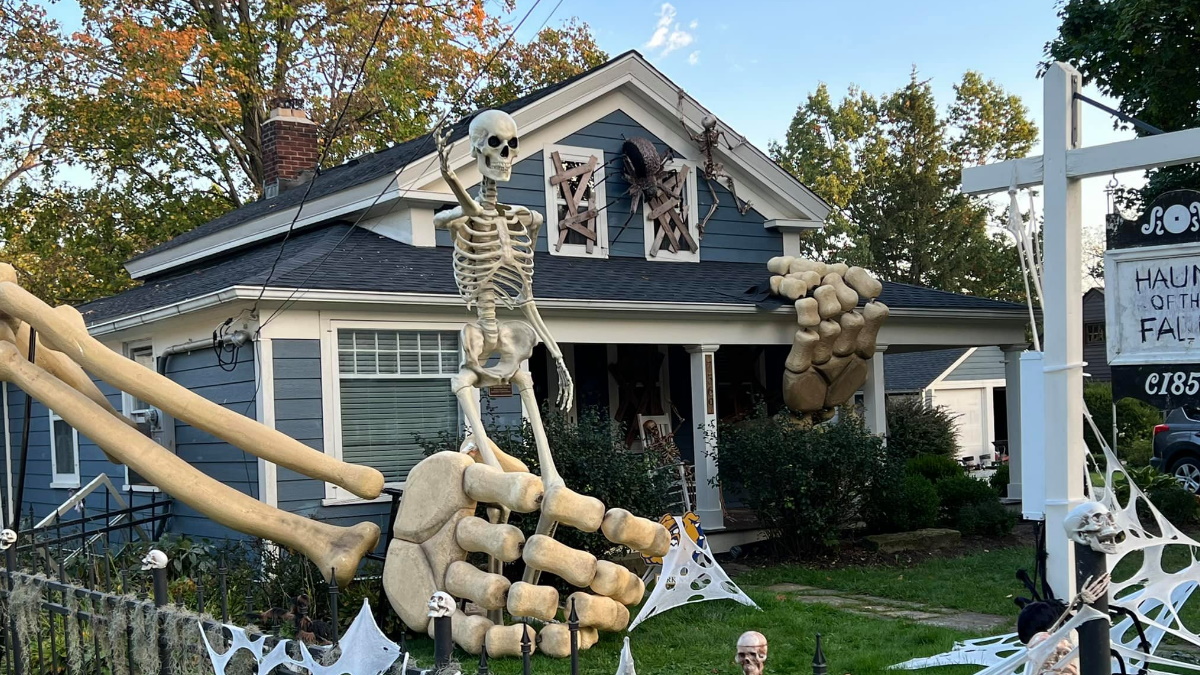 An Ohio resident has just upped the 12-Foot Home Depot Skeleton game to such an absurdly epic degree that I wish I could go to their house to see this set up in person.

I first came across my new favorite Halloween house in a viral tweet from Rob Sheridan, who shared the original link from the Cleveland Haunt Club, a public Facebook group for folks to, “provide amateur/professional haunters and haunt enthusiasts of Northeast Ohio and surrounding areas a year-round outlet for their pastime of haunting and Halloween.”

Ohio resident Alan Perkins has taken the 12 foot skeleton game to an entirely new level, building a MASSIVE skeleton bursting out of his home to grab the 12 footer like a toy. Apparently he’s still going to add a giant skull bursting through the roof. Just phenomenal work. pic.twitter.com/0aTEQhVWvu

Alan Perkins more than understood the assignment. Alan Perkins did the extra credit, right down to the question the teacher couldn’t figure out the answer to. This is absolutely the first stop you make while Trick-or-Treating.

When it comes to neighborhood Halloween decorations I expect to see fake cobwebs, ghosts, and maybe that Home Depot skellyman (note: I have yet to see it in person anywhere in my area).

But this? How do you even go about making something like this?! How is this someone’s house and not some Universal Studios installation for October?!

I, for one, would welcome a back and forth between Ohio neighbors who try and outdo what Alan Perkins has done.

What I love about this setup (besides the obvious HOLY SHIT size of it) are the little details. There are regular-sized skeletons to hammer in just how big those bone hands are, roof shingles in disarray to make it look like it’s being ripped apart, and that 12-foot skeleton can be easily lifted by the skeletal titan that’s attacking Perkins’ house.

Perkins wrote back on October 1st, “Home Depot was out of giant skeletons. So I decided to make one.” Apparently, that did not mean duplicating the Home Depot bone friend, it meant making one that could literally grab a house and treat it like it was part of a playset, because, on October 10th, Perkins shared the following update:

So people keep asking for updates. I got the arms and hands mounted today. A neighbor of mine let me borrow his 12-foot skeleton to capture. Still need to make the skull breaking through the roof. Getting closer though. I also posted a picture of my window covers and the connection pieces for the knuckles that allow the fingers to move. Located on River Road in Olmsted Falls.

The SKULL breaking through the ROOF?!

You mean there’s more to this project that’s still to come?!

No wonder why this went viral.

This does raise the question: what does one do once Halloween is over? I can’t imagine this would be easy to take down, and where the hell would you even store everything?

Put Santa hats on the skeletons, then hearts and cupid bows…