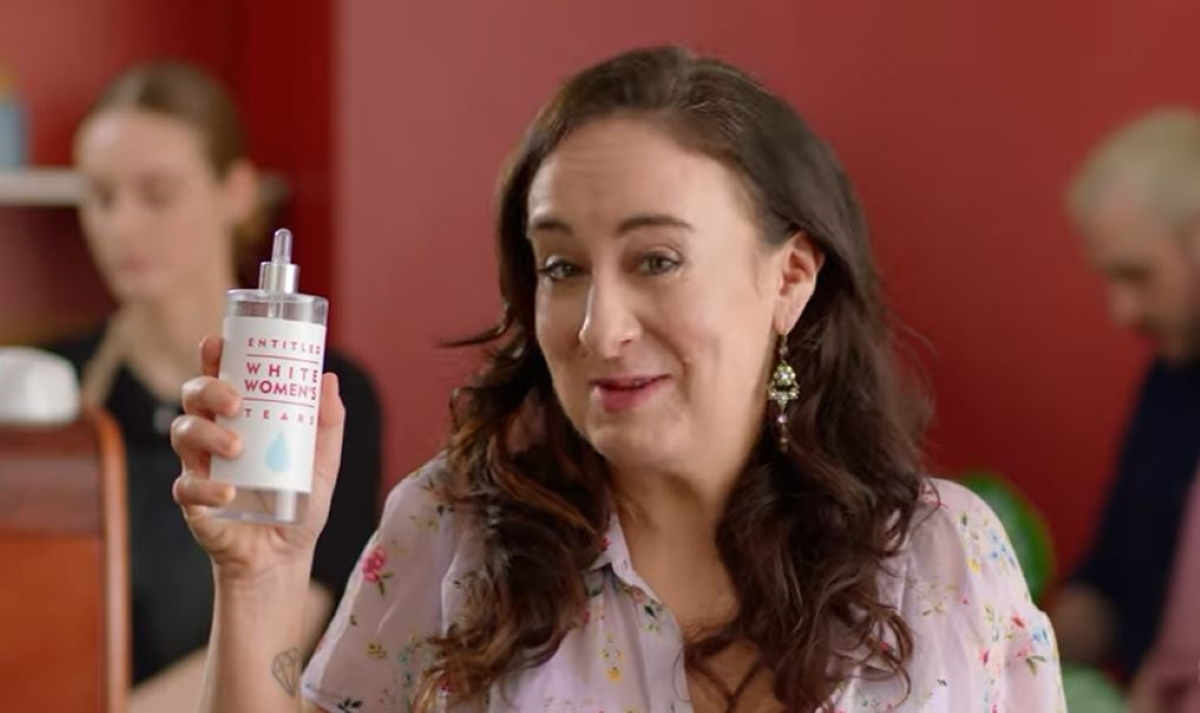 The phrase GET HER AWAY FROM ME was trending, in all caps, after a woman named Ijeoma Ukenta uploaded several videos where a white woman (now revealed to be Abigail Elphick) assaulted her at a Victoria’s Secret. The woman backed off when she realized she was being filmed.

Embracing the phrase “only sorry that I got caught,” the videos show how Elphick (rightfully labeled as Karen) proceeded to place a “white woman tears” trap card in an attempt to garner sympathy from the onlookers who, most definitely, did NOT sign up for that kind of nonsense.

The videos have made the rounds on Twitter, with people pointing out Elphick’s cartoonish temper tantrum, complete with “kicking and screaming on the ground like her mama won’t let her have a Snickers” and “begging to not be filmed” since that could, potentially, lead to a Karen being held accountable for her actions.

All of the tracks from Karen’s Greatest Hits are there, a truly vile Karen staple being the part where she claims to be having a mental breakdown.

Not white people responding claiming this is “mental illness”.

Karens have been pulling this shit for centuries and with deadly results.

Aside from the obvious (& most important) issue of racism, we also need to talk about how “Get her away from me” lady is weaponizing the language of disability.

She attacked someone & immediately claimed she was having a “mental breakdown” to escape consequences for her actions. https://t.co/PLU8JXiVzc

In a perfect world, folks would realize how calculated of a move this was on this particular Karen’s part. Like a well-timed, unsettling TikTok trend, Elphick cries right on cue when she realizes that there’s a camera rolling.

Oh. A whole TikTok trend where… white women… show us how good they are at performatively crying on cue… pic.twitter.com/a9zHLocjru

Remarkably, Elphick keeps up the act for so long that the incident has been broken into multiple parts.

What has truly astounded everyone is how Elphick screams GET HER AWAY FROM ME while pursuing the target of her weaponized tears. She’s telling Ukenta to leave her alone by… chasing after her. As Ukenta points out in the video, nothing is stopping Elphick from leaving HER alone. Why Elphick is choosing to stand in place and scream like a viral video of a goat screaming in time to Taylor Swift is beyond comprehension… until you realize that this is a common technique employed by white women.

A white woman screaming in fear of being held accountable is a well-seasoned practice. White women are fully aware of the power of their tears and weaponize them quite often. At best, the police get called and are left to be annoyed (seriously, there should be some kind of ticket they can issue for white women weaponizing their tears), the white woman made to look foolish as she faces social ridicule and, potentially, job termination if her employer catches wind of her antics. At worst, the person (usually Black) is the one punished, wrongfully accused of hurting the white woman. As pointed out by this Nylon article about the TikTok trend I referenced, “The videos are particularly disturbing because white women’s tears have historically caused harm, violence, and death to Black people. Online, people have said the videos recall the violence done to Emmett Till, the 14-year-old boy who was lynched in 1955 after a white woman falsely accused him of offending her.”

The trend of white women crying on tiktok and then SNAPPING back to normal is not funny actually. As a black person I am constantly endangered by white women tears. The power those water works have over a black persons LIFE is shown time & time again in cases like Emmet Till.

Since we can’t pass a bill to stop modern day lynchings, can we at least classify White Fragility as a felony?Because for centuries the tears of white women have stained the very fabric that belongs to the dignity and souls of Black women. #BlackTwitter #WhiteRage #Karen 👸🏽✊🏾🖤 https://t.co/nKs9ltqSYQ

At one point in Ukenta’s video, a white woman being rung up at the counter does take Elphick’s side, asking Ukenta why she won’t walk away when she’s the one who was attacked. While Ukenta quickly shuts her down, it’s extremely telling that this woman chose to label Ukenta, the victim of Elphick’s attack, as the one in the wrong. She could’ve easily told Elphick to walk away, but instead, she went after Ukenta.

Unless I missed it, Not once did anyone ask the *Actual* victim if she was okay. They see that white woman charging her, many times. They hear her screeching. Yet, not once did I see anyone actually go help the Black woman. Every time, benefit of the doubt was given to Karen.

According to Ukenta, who has started a GoFundMe to take legal action against Elphick, she was kicked off of TikTok after posting the videos so they can now be seen on her YouTube channel.

I was banned off Tik Tok however everyone else was allowed to tell my story. I’m traumatized 😫😪😔

The YouTube videos go more in-depth and are, in my opinion, even more infuriating. The visual evidence of Elphick attacking Ukenta then crying on cue was already damning enough, but now there’s a video showing Ukenta at the police station. Here, we see that she’s filed a police report.

In the incident report, Elphick admitted to not wanting to be recorded in fear of losing her job and her apartment if the video was posted online. Ukenta also reveals not feeling protected by the police who arrived on the scene. On her YouTube channel, there’s also a video showing Ukenta speaking to police on the scene after Elphick had called them.

There are 8 videos to this saga (so far), and truly, it’s exhausting to see the victim of white woman entitlement having to take such lengths to protect herself.