Amy Cooper’s Apology Is Bulls**t. She Knew Exactly What She Was Doing. 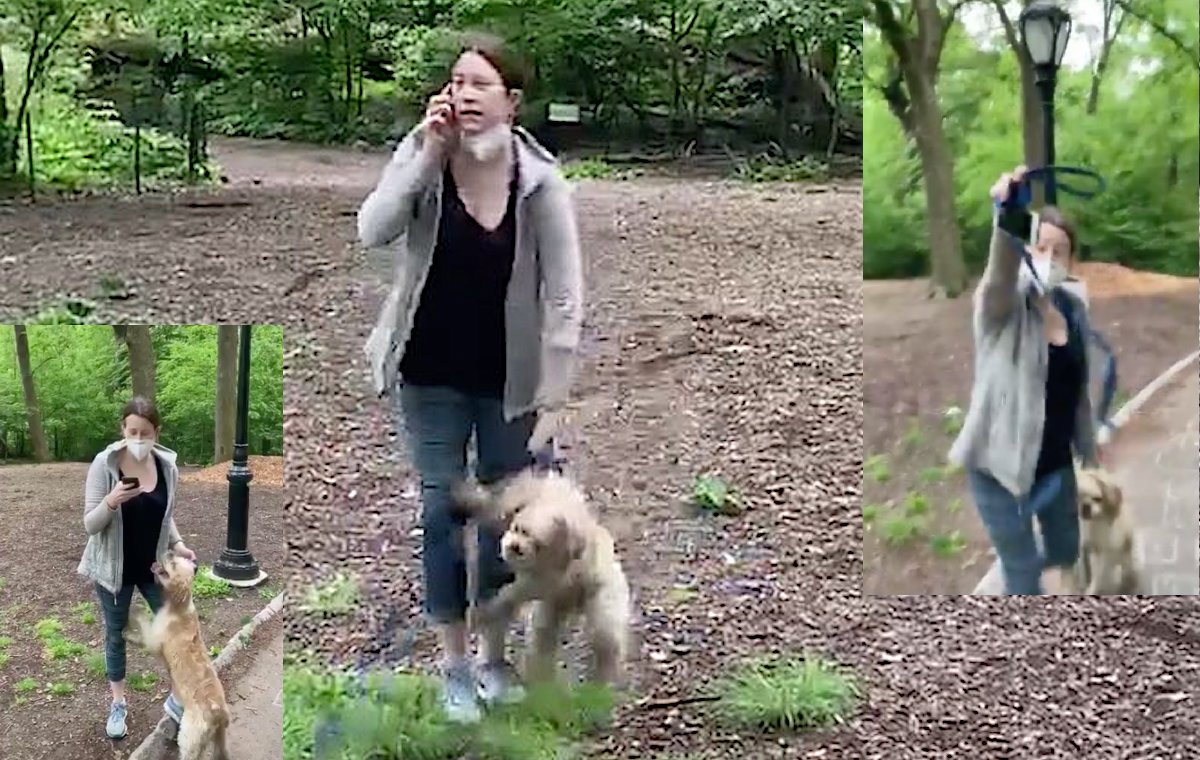 By now, you’ve likely heard about Amy “Central Park Karen” Cooper. Her name, along with the CPK moniker and about a half dozen other identifiers, have been trending all day on Twitter. This arose after a video surfaced online of Cooper, who is white, calling the police on a birdwatcher, who is Black, and who also committed the apparently egregious offense of asking her to follow some simple park rules whilst being Black.

The encounter took place in the Ramble, an area of Central Park in New York City known for birdwatching. Amy Cooper was there Sunday morning with her dog off-leash, which is prohibited in the Ramble because it messes with the birds and other wildlife. Christian Cooper (no relation) says he told Amy that her dog needed to be on a leash and the two started arguing.

During the argument, Christian Cooper began recording Amy and later posted the video to Facebook. It was also shared on Twitter by his sister, Melody.

Oh, when Karens take a walk with their dogs off leash in the famous Bramble in NY’s Central Park, where it is clearly posted on signs that dogs MUST be leashed at all times, and someone like my brother (an avid birder) politely asks her to put her dog on the leash. pic.twitter.com/3YnzuATsDm

The argument got heated because Amy (who has admitted she knew off-leash dogs weren’t allowed in the Ramble) got upset when Christian Cooper took out some dog treats—treats he had on him because he’s an avid birdwatcher and has encountered rule-breaking dog walkers before. Apparently, a lot of people will let their dogs run free where they’re not supposed to, but they’ll freak out and rein the dog in if a stranger offers them food. It’s a delightfully wily trick.

Amy didn’t find it delightful, though. In the video, you can see her saying she was “taking a picture and calling the cops.” You can also see that the two have a pretty wide berth between them and that Christian is asking Amy not to come near him.

Still, she threatens to call the police. “I’m going to tell them there’s an African American man threatening my life,” she says. And then she does that.

Since the video went viral, Amy Cooper told CNN she wanted to “publicly apologize to everyone.” She insisted that she is “not a racist” and that she “did not mean to harm that man in any way.”

That is, quite simply, bullshit.

Amy Cooper cannot claim she is not “a racist” because she is. Obviously, I can’t know what’s in her heart or what she thinks is in her heart, since a whole lot of white women rest on good intentions while engaging in racist actions and actively supporting racist systems. It’s one of the big differences between being “not racist” (which is meaningless) and anti-racist (which takes actual work).

Amy Cooper’s apology is BS because she knew exactly what she doing. In absolutely no way was this a situation that necessitated police intervention, but she knew that we live in a world and a country where threatening to call the police on a Black person is tantamount to threatening their life.

I keep thinking about that shift in the register of Amy Cooper’s voice, to make it sound like she was actively being attacked while on the phone. How she knew exactly what that inflection would signal to the person on the other end of the line. It was a lie. It’s so egregious.

As Christian Cooper told CNN, “I videotaped it because I thought it was important to document things. Unfortunately, we live in an era with things like Ahmaud Arbery, where black men are seen as targets. This woman thought she could exploit that to her advantage, and I wasn’t having it.”

Christian Cooper is on the board of the New York City Audubon Society and is apparently well known in NYC’s birding community. He is also reportedly a Harvard graduate, a former Marvel Comics editor (!), and the senior biomedical editor at Health Science Communications.

1) Leash laws in the Central Park Ramble are essential for protecting birds and other wildlife. Yet they are too often flouted by habitual offenders. 2) We know the birder who filmed this for his politeness and civility, and are relieved that he was unharmed. https://t.co/d6hcVVzZ5q

Christian Cooper, the target of this false accusation, is a Harvard graduate, a former Marvel Comics editor and now the senior biomedical editor at Health Science Communications. He was BIRD WATCHING in Central Park when this occurred. It can happen to any of us. At any time.

But as many are pointing out, none of that should matter in a situation like this. No degree of “upstandingness” should be needed to prevent a white person from weaponizing their race and the police’s history of violence towards Black people.

If this man had 7 tattoos on his face she still could’ve leashed her dog, let alone everything that followed.

I share this more b/c we see the narrative “she called the police on a black man” like the man is some faceless, nameless idea, rather than a living breathing person.

I’m so tired of seeing a list of credentials every time one of us is harassed like this.

That in and of itself is an injustice.

Our worth doesn’t come from what we do, or how many degrees we have. Our worth is WHO WE ARE.

Amy Cooper told CNN that her “entire life is being destroyed right now.” And honestly, that doesn’t sound like an exaggeration. After being outed on social media, she’s been fired from her job at the investment company Franklin Templeton and she’s also had her dog taken away since, as you can see in the video, she appears to be inflicting some pretty substantial pain as she yanks it around. There’s even been a call for her to be permanently banned from Central Park.

There’s also a call for her to be permanently banned from Central Park 😂https://t.co/r5XrdSYUKP pic.twitter.com/DFYENSeFqv

So yes, she is losing a lot. But the passivity of her language is completely disingenuous. Her life is not being destroyed. She destroyed it.

If this is true, it seems like an entirely appropriate consequence for *knowingly attempting to have someone killed for asking you to leash your dog.* https://t.co/BeNAgzbEsH