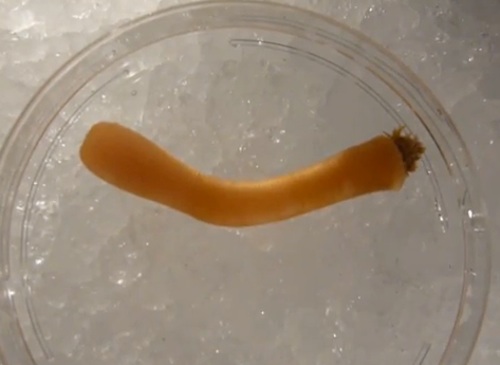 A new study of priapulids, commonly referred to as “penis worms,” may have just unraveled a large part of what scientists have believed about evolutionary history. The priapulid belongs is a member of the protostome family, a sub-set of living species defined by the fact that they develop a mouth and anus as embryos. After doing some genetic testing, it seems that priapulids don’t actually do this, which means the whole group will need to be redefined by other common traits.

The discovery may change the known evolutionary track of a large group of living things, including people. In terms of evolution, scientists classify species based on major traits at the embryonic level. One of the major classifying traits is whether a creature develops two openings (a mouth and an anus) as an embryo. Those species are separated into two groups: Protostomes, who get form a mouth first, and deuterostomes, who make their anus first. (Guess what? We’re the second one!) Until now, penis worms have been classified as a protosomes: According to this new data from the norwegian University of Bergen, however, they may have evolved from deuterostomes, just like us.

The key is one particular priapulid, Priapus caudatus, is genetically very close to the first “protosome” as we know about. If the penis worm developed an anus before it a mouth, then the protosome may not be reasonable way of classifying evolutionary progress. If that’s the case, scientists will have to re-name protosomes, and possibly re-classify certain species into other groups.

As of now, the Priapus caudatus, is simply a piece of outlying data: An exception to the rule. That said, it’s an exception to a rule scientists have sure of for a really long time, so it has the potential to change everything. Put it another way: Right at this moment, the penis worm is the most important species in the study of evolution.