US Government: Naturally Occurring Genes Should Not Be Patentable 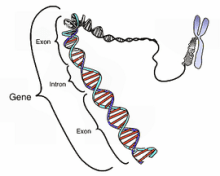 The U.S. federal government has declared in a recently issued brief that naturally occurring genes should not be subject to patents, backing up a District Court judge who in March had struck down several attempts to patent human genes associated with cancer.

While the impact of the government’s brief should not be exaggerated — it’s not clear whether it will be implemented as policy by the U.S. Patent Office, which would have a major impact on the pharmaceutical and biotech industries — it is a surprise. Law professor and patent watcher Dennis Crouch writes that “Last month, I heard a rumor that Obama administration science and legal advisors outside of the USPTO supported Judge Sweet’s ruling [invalidating the patents].  At the time I disregarded that suggestion as unlikely. I was wrong.”

“We acknowledge that this conclusion is contrary to the longstanding practice of the Patent and Trademark Office, as well as the practice of the National Institutes of Health and other government agencies that have in the past sought and obtained patents for isolated genomic DNA,” the brief said.

Elsewhere in the brief:

[T]he patent laws embrace gene replacement therapies, engineered biologic drugs, methods of modifying the properties of plants or generating biofuels, and similar advanced applications of biotechnology. Crossing the threshold of section 101, however, requires something more than identifying and isolating what has always existed in nature, no matter how difficult or useful that discovery may be.
…

A product of nature is unpatentable because it is not the inventive work of humankind. That essential rule cannot be circumvented by drafting claims for the same natural product removed from its natural environment and proclaiming the result “pure.”

To reiterate: Potentially enormous news, though it awaits to be seen to what extent the Patent Office enacts this as policy. If it does, the for-profit companies that have invested millions and stand to make many millions more from gene patents will undeniably be adamantly opposed. Though their self-interest in the matter is obvious, they’re likely to argue, not without merit, that taking the profit motive out of gene exploration will kill many companies’ desires to explore human and other genomes, and with that desire kill off potentially life-saving breakthroughs. At that, universities would continue to do good work without such a profit motive, and the seeming wrongness, for many people, of naturally occurring genes being locked down by corporations would be dissipated.