Geena Davis to Produce Documentary on Gender Disparity in Hollywood … With a Male Director? 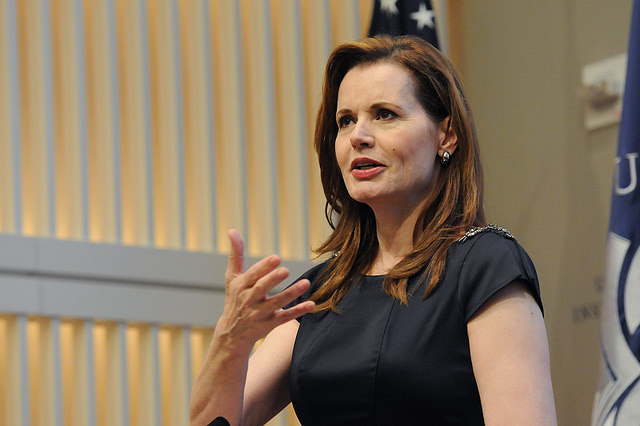 Geena Davis has been on the front lines fighting for gender equality at all levels and in all positions in Hollywood. She even formed the Geena Davis Institute on Gender in Media to study and work toward solutions for gender inequality in media, basically making it her life’s work.

Now, she’s partnered with a company called CreativeChaos vmg to produce a documentary on the subject, and according to Variety, it will “be told through the eyes of experts and researchers using data provided by the Geena Davis Institute on Gender in Media, as well as first-person accounts of high-profile actors, executives and artists in the field. Its goal is to take a systemic look at unconscious bias and provide a roadmap for solutions to act as a catalyst for change.”

In an interview with The Guardian, Davis said she was helping to make the film because “I’ve been encouraged by my peers speaking out on gender disparity in recent years, but we still are not seeing the actual number change. There’s been no real improvement in the number of female roles since 1946, and there’s still a dearth of female directors.”

By the way, this documentary will be helmed by CreativeChaos vmg’s Tom Donahue.

I know. I thought the same thing. I heard about this documentary mostly through the female filmmakers in my social media feeds, all of them angry that this film that is specifically about the problem of women not being offered enough opportunities in the entertainment industry had a male director, and that Geena Davis of all people would “allow” this to happen. I totally got sucked into the anger and outrage vortex for a second. Then, I needed to know more, so I went to the source, and what I discovered was that like most things, it wasn’t as cut-and-dried as all that.

As for the origin of the project, Peters explains, “The development of this film happened when I (a co-producer on the project) and Tom Donahue were brainstorming film ideas over breakfast one day. We spent months in development with the team at CreativeChaos vmg, and after we finalized the direction for the film, we collectively approached Geena and the institute about coming on board the project as an executive producer.”

So, contrary to what the project announcements yesterday made it sound like, this isn’t a “Geena Davis Project” in the sense that it originated with her. It originated with this trio of people who later went to Davis for her help and expertise. This is an important point, because much of the anger floating around about this project’s male director was directed at Davis for not “being the change” enough. Arboleda clarifies:

“Tom was never ‘hired’ to the project. Tom and I, we generate all our projects internally, and this is an issue that became incredibly important to us, and we tackled the project together. We approached the Geena Davis Institute, not the other way around, to get involved. The idea generated within our company, because it was important to us. Tom is the producer as well as the director, not just a director-for-hire.

CreativeChaos vmg is a company that creates socially conscious documentaries. Their most recent documentary, Thank You for Your Service, is about the mental health crisis in the military, and how both servicemen and veterans can best be helped. Social justice is the company’s entire bag, and when they become passionate about an issue, their natural response is to make a documentary. Peters was happy that this was a project that Donahue wanted to take on:

“As a woman, I was absolutely thrilled that a male director (and Gracie Award-winner no less) wanted to be part of the solution and his passion is what drove the project and secured the funding to make it happen. Tom has always felt that women were under-represented in Hollywood. The vast majority of our producing team is female and we are committed to having at least a 50/50 gender parity on set. Additionally, our financiers are mostly women.

We feel very strongly that without Tom’s determination to get this film off the ground, this story would have taken years to be told. CreativeChaos vmg has always been at the forefront of social disruption and in our eyes, regardless of gender, they are a great choice to make a film like this. Tom’s participation is a fantastic example of the positive impact men can have in not only supporting women in entertainment, but also working side-by-side with them to tell their story.”

As I continued to chat with Arboleda, I thought about the fact that yeah, women need to help other women, but the onus shouldn’t be on them to make changes on their own. Men shouldn’t be allowed off the hook. They should be making this their issue, both by giving women a platform and more opportunities in film, and by putting themselves in positions where they talk to other men about this being a concern.

A male interviewer going up to another man and asking “What are you doing to improve opportunities for women in Hollywood?” That can be really powerful. Just as it’s not up to gay people to educate straight people, or trans people to educate cis people, or people of color to educate white people, the burden of education shouldn’t be laid entirely at the feet of women when it comes to gender inequality. Men need to take it upon themselves to educate themselves, then educate each other.

Arboleda talked about the moment he realized why he had to help bring this film into existence, saying:

“I was listening to a podcast, it might have been WTF with Mark Maron, and Gloria Steinem was on it, and she was talking about how gender equality is not a ‘feminist issue,’ it’s a ‘social justice issue.’ And that was the moment it clicked for me, because what we do at our company is social instruction and social justice. We are all about unpacking systemic issues. Our company is based on tackling systemic issues.

Our most recent film was about the mental health crisis in the military and how to change that. This film is the same thing. We have a systemic issue of the discrimination of women in Hollywood, and that has a direct translation to the national consciousness, because that discrimination translates onto the screen and becomes a part of the popular consciousness.

So, for us, we want to tackle what are the problems, how did it happen historically, and what are the solutions that can make change, because our films are about making that change. So, the question is how do we make that change happen, how can the film be the catalyst for that change? All of our films are about that, whether it’s about mental health, or whether it’s about gender equality. It’s the same thing for us.”

I brought up the fact that a big reason why Donahue directing this project provoked such strong feelings was that since Geena Davis is so high profile, the announcement of the project was covered as a “Geena Davis project.” The coverage latched onto her, because she’s the big-name draw. Arboleda was quick to point out that, while that may have been important to the media outlets that picked up the project announcement, that was the last thing on the minds of the producers:

“She’s so important because of her institute. They have data. They have the numbers to show that this is not an emotional question. The data shows so clearly what’s wrong with the situation and what the issues are, which made her ideal to partner with. It’s not like we sought her out just because she’s a high profile woman, but we reached out because that institute is so important, and she’s changing the conversation.”

Something that astonished me as I read the announcements of this project in several media outlets is that none of them even brought up the fact of a male director on this project as a conversation point, and I mentioned to Arboleda that this seemed indicative of the very problem we were discussing. That no one bats an eyelash at a male director. When I asked him if anyone other than me had approached CreativeChaos vmg to ask about this, he said no. “Those stories were picked up,” he said. “We were never interviewed for them. We saw [the announcement] at the same time you saw them!”

He then stressed that both they, and Davis, believe that men need to be a part of the solution, and that this project is ultimately about creating more opportunity. They already have more women than men on their production team, and getting a 50-50 gender ratio on the crew for this project is something that they’re currently working hard to achieve.

Documentaries work very differently than narrative films in that it’s usually the person or people who conceive the idea that direct it. It’s not like a narrative film where you have a scripted story that you can then hand off to a director for their take on it. Documentaries are shaped as they go, and part of being a documentary filmmaker is finding the story as it’s being pursued. Since the project originated with CreativeChaos vmg, it makes sense that their director would be seeing the project through.

That said, if you do have a narrative film project that needs a director, or are looking to produce a documentary by a female documentary filmmaker, here are some places to look for a women who’ll get the job done:

It’s understandable that people got agitated when reading about this yesterday. Women in Hollywood have been backed into a corner for too long, and the need for change is real. However, a part of that change is not only allowing, but demanding that men be involved in creating it. What’s more, I think that this is also a way for these individual men to learn more about the issue and grow as allies. The creation of this project seems to be their way of figuring out how they can best help as they move forward as creators, and I wouldn’t want to stop that kind of growth. I believe that this team is going about this project the right way, and I look forward to seeing the finished film whenever it arrives.

**Full disclosure: I met the team at CreativeChaos vmg years ago when a former employer of mine was working with them on an unscripted television pilot. We didn’t work closely, and I’ve only ever met these people in person once or twice, but there was a previous relationship, which is how I was able to make contact for this interview. My opinions, however, are my own. As always!