Geeks don't have to be impolite. 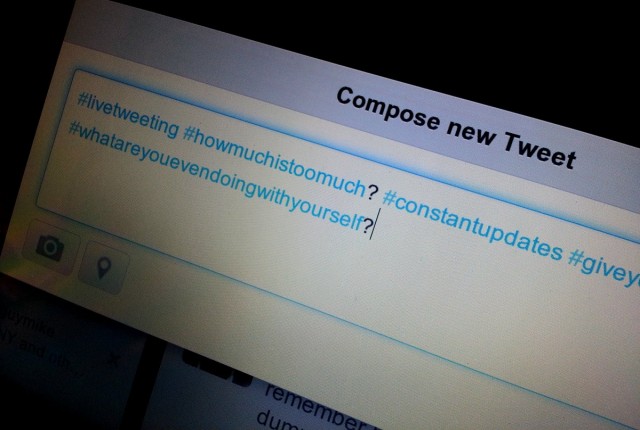 Geeks are generally viewed as having poor social skills, but we don’t think that has to be the case. That’s why we’re starting a new weekly feature called “Geek Etiquette” where we try to settle issues of how to be polite and geeky at the same time. First up, is livetweeting a TV show or event rude to your followers?

For those of you not familiar with the term, livetweeting is when Twitter users post a series of updates, often with a unified hashtag, during the airing of television show or other live event. It can be a fun way to engage with a larger group experiencing the same thing you are, but it can also be a mess for anyone not experiencing it.

For example, let’s say you have a group of friends who love professional wrestling, which you yourself have no interest in. Every Monday night, they livetweet the wrestling game with the hashtag #RAW. You’re on Twitter for other reasons, but your stream quickly becomes a flood of updates about what Hulk Hogan is doing.

You could choose to unfollow these people, but they’re your friends, and when they’re not letting you know about every piledriver or roundhouse kick or whatever, you want to know what they’re tweeting about.

During big television events like the last few episodes of Breaking Bad, a lot of people were livetweeting the episodes, and sometimes dropping some major spoilers.

The official Twitter accounts for TV shows or actors on the shows have been known to do this as well. Agent Coulson himself, Clark Gregg, frequently livetweets during episodes of Agents of SHIELD. It’s all about engaging the audience, but what about the part of their audience that’s DVRing the show for later? We do our weekly roundup of comic recommendations based on each episode SHIELD, but we usually don’t get to watch the show until the morning after.

Are your wrestling buddies and Phil Coulson being rude?

No. It can be frustrating to be following someone livetweeting something you don’t care about, or something you care about a lot, but can’t get to until later, but the onus is on you to avoid unwanted tweets. Tweetdeck has built-in filter capabilities, and other browser extensions exist that let you filter out unwanted spoilers for specific shows or keywords.

That said, it might be worth being aware of when and how often you’re tweeting, be it live or otherwise. Just because you’re not being rude doesn’t mean you can’t also be annoying.