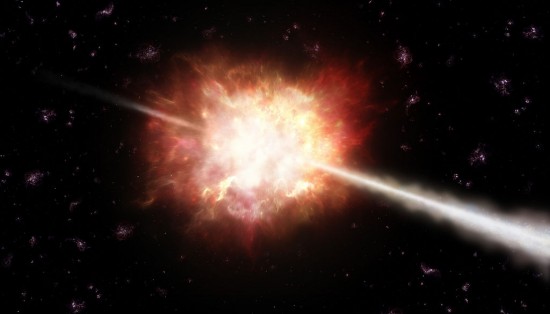 When it comes to mass extinctions, most of us immediately think of the event that killed dinosaurs. However, there have been several far more destructive mass extinctions in Earth’s turbulent history — some which have come much, much closer to ending all life on the planet. One such event, the Ordovician extinction, saw 60% of ocean invertebrates die at a time when all the known life was in the ocean. Now, some scientists are claiming that this mass die off was actually caused by a gamma ray burst from a cluster of distant and dying stars.

The conventional explanation for the Ordovician extinction is all about cooling, and a loss of CO2 in the atmosphere. During this period, scientists believe sea levels rose and fell, disrupting habitats while the Earth’s temperature dropped while landmasses shifted. This is, by and large, the accepted explanation for the extinction.

However, a gamma ray burst would fit with the early patterns of extinction in the Ordovician event. In this scenario, the Earth is bombarded with high energy gamma rays which strip the ozone from the atmosphere. This would expose the photosynthesizing plant life on the Earth to a deadly level of ultraviolet radiation. According to Wikipedia, a ten second gamma ray burst could have halved the amount of ozone in the atmosphere.

The gamma ray hypothesis was first brought forward in 2003 by Adrian Melott from the University of Kansas in Lawrence. Though intriguing, it has failed to gain mainstream traction mainly because the causes of gamma ray bursts — namely, stars collapsing into black holes or merging stars — typically don’t leave much to study. It becomes very difficult to make a solid determination about where the star would have been.

Interest in the gamma ray hypothesis is seeing some resurgence, however, thanks to Wilfried Domainko from the Max Planck Institute for Nuclear Physics. Domainko believes that if the star death occurred in one of the swarms of stars called globular clusters, than it would be possible to find some stellar remnant of the burst. To back up his claims, Domainko figures that given the number of clusters and frequency of ray bursts, one should have occurred near Earth within the last billion years.

A billion years is a wide spread, but the Ordovician extinction would fit nicely in the center of that range. In their report, the New Scientist suggests that perhaps the European Space Agency’s Gaia probe, which will create a 3D map of our surrounding stars, could track down a possible culprit. Until then, or some new piece of evidence appears, we’ll have to stick with cooling and sea level changes as a decidedly un-sexy answer to the Ordovician mystery.