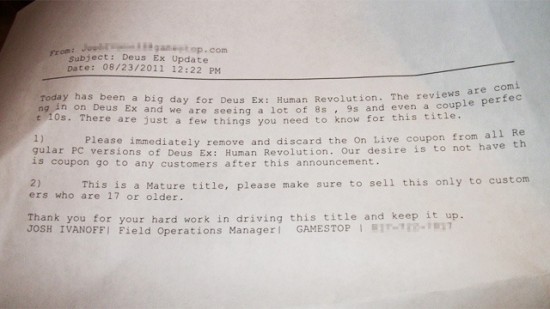 As you may know, Deus Ex: Human Revolution was released yesterday. If you buy a retail copy, it comes with a coupon that entitles you to play the game for free on the streaming service OnLive. That is, of course, unless you buy your retail copy from GameStop, whose employees were ordered to remove the coupon from the box and throw it away, in a memo from Field Operations Manager Josh Ivanoff.

It likely has to do with the fact that OnLive is a serious threat to GameStop. For the unfamiliar, OnLive is a game streaming service where games are actually played and processed on remote machines and then streamed, in real time, to the user. This negates the need for expensive, powerful hardware on the user’s end and just requires a good Internet connection. It’s a cloud gaming platform with a digital distribution system. In summary, the online, streaming, digital-friendly OnLive is everything GameStop is not, and it looks like GameStop is incredibly afraid that you might figure that out.

When Ars Technica came across this letter, they attempted to contact Ivanoff directly, but he refused to comment and transferred the matter to Public Relations. GameStop spokeswoman Beth Sharum is reported to have confirmed the activity mentioned in the memo, saying: “Square Enix packed the competitor’s coupon with our DX:HR product without our prior knowledge and we did pull these coupons.”

Okay, so maybe GameStop was unaware that they were going to be providing their customers with free coupons for their competitor’s service and it is understandable that they might not want to do so. However, going into every copy of a game, one by one, and removing the coupon is still an unprofessional way to handle the situation and also a tremendous sign of weakness on their part. Not only is the covert removal of these coupons actively robbing the customer of something he is entitled to, but it also lays bare GameStop’s passive, defensive and insecure approach to dealing with competition. If your best answer to other services is to go to great lengths to keep their existence a secret, what does that say about the services you provide and your confidence that those services are valuable in their own right? Not much.