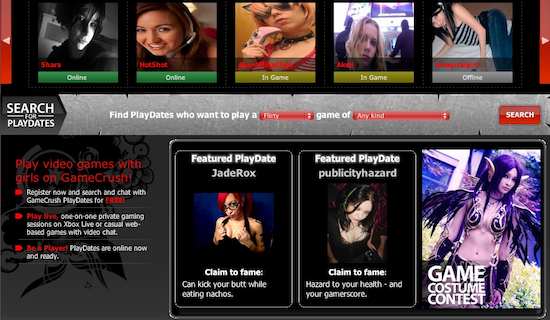 The new Xbox 360-based “adult social site” GameCrush” was available for beta until 10,000+ guys signed up at once and forced the service to temporarily close, presumably because the female “PlayDates” can only handle so many users at once.

What’s GameCrush, you ask?  You know those really annoying commercials that come on television late at night, offering you the chance to talk with real, live girls on the telephone?  Usually there’s a busty, halter-top wearing, orange-hued young lady twirling her highlighted hair while holding a telephone to her ear and claiming she wants to talk to you, when in reality she wants a real acting job but posing for Quest was the best she could get.  Anyways, GameCrush is a lot like that, only replace the phone call with an Xbox live session that can be either “flirty” or “dirty,” and voila!

Something like GameCrush was bound to happen, and the brain trust that thought this one up is probably laughing its way all the way to the bank (PlayDates cost almost a dollar a minute..now there’s a familiar pricing model).  Video games + girls + threat of fake sexual encounter= money, right?  Well yeah, if you’re totally gross.  And here’s the real kicker: GameCrush claims their “PlayDates” can make up to $30/hour while having fun playing video games!  That’s a lot of money ladies. In fact, why am I still sitting here writing about this?  Gaming with strange men online for cash is the new writing articles about Internet services that let you game with strange men online for cash. 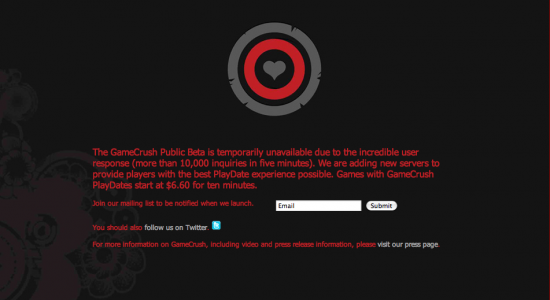 While I don’t care what dudes are doing with/to/on their XBoxes in the privacy of their own homes, there’s something about GameCrush that’s just really, really tacky.  There are few places in the world left for women to hide from the objectifying male gaze and its hegemonic reproduction of gendered…oh who am I kidding, this is one train wreck I can’t peel my eyes off of.  I’m outta here.  See you at GameCrush!