Game of Thrones Veteran Recap: You Win or You Die 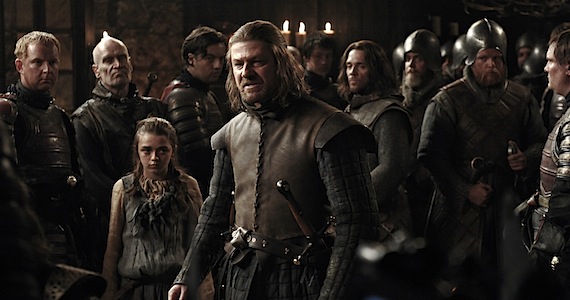 Episode 7, “You Win or You Die”: In which not everyone says “Not today” to Death.

— That’s a lot of red Lannister tents. See Robert? This is how nobility hunts … with a retinue.

— NEW SCENE! Tywin Lannister is on the scene. And skinning a dead stag. Oh HBO, I see what you did there. Can’t decide if Lord Tywin strikes me as the type to skin dead animals or not.

— Hmmm, Lord Tywin doesn’t really like ANY of his children does he? Is he really concerned with saving Tyrion face or is this a pre-emptive strike for the war he knows is coming? (Since he’s instigating it.)

— Tywin waxes poetic about Jaime being blessed with natural abilities and squandering them in the Kingsguard. For half a second I think we’re getting the backstory on why Jaime joined the Mad King’s guard and what his purpose was to Aerys, but no.

— Cersei and Ned meet to trade barbs in the Land of the Returning Mediterranean. Excuse me, where the seven hells is my godswood? Ned has gotten significantly less brooding under a weirwood tree done in this series than I was expecting. He’s running out of time to fill his quota!

— Stupid Ned Stark strikes again. Yes dear, give the enemy a fair chance. It’s the sporting thing to do.

— Listening to Cersei speak on her adoration of Robert at their wedding gives me cancer. You didn’t want him, you wanted Rhaegar. But Elia got him so your Daddy decided he couldn’t be King anymore, and got you a new one. OMG, Cersei is the Paris Hilton of Westeros.

— Hey, the naked child of a whore. Amazing how Petyr’s brothel has windows that overlook the Water Gardens of Dorne. Magic truly is returning to the world.

— NEW SCENE! This new scene with Petyr and Ros and Alayaya some random whore is confusing and unnecessary. It’s the first sex scene that actually made me make this face: o__O There is subtext about Littlefinger and his inadequacies, but it just came across as creepy. At first I couldn’t tell if he was talking about Lysa or Catelyn … it was Catelyn.

— Vaguest infodump ever, you guiz. Even Ros couldn’t save that. Unless you already knew what was going on with Sassy Gay Friend, Ned. You should’ve listened to him. But no. You’re a stupid bitch.

— Ned to Littlefinger, “Do you have a shred of honor?” LOL NO.

— Petyr also has a plan for succession. I personally like Renly’s better, but the fact that everyone has an alternate plan for what to do after Robert’s death should be sending up red flags here, Lord Stark. Ned however, is too consumed with shame at having to ask Littlefinger to pay off the gold cloaks to notice.

— Speaking of which, you’d think one guy ONE GUY in all of King’s Landing would’ve looked at Lord Baelish..master of coin, keeper of the gold cloaks … and seen how much power he was accruing behind the scenes.

— “It’s only treason if we lose.” Petyr is skeezy as the seven hells, but man, can he deliver a line.

— Jon and Sam are taking their vows in front of the first proper weirwood tree we’ve seen all season. I say that because even though one appeared in the godswood of Winterfell, the camera never focused on the face and red sap/blood tears. I’d be more upset that this scene isn’t taking place in the middle of a grove of weirwoods but I’m just so happy to see one. #lowexpectations

— Maybe … maybe Tonks will infodump Bran later about the history of the weirwoods. #stillhopeful

— Oh hey, Ghost … almost forgot there were wolves in this show. Something not right about that.

— That wine merchant assassin isn’t striking me as loyal to a fault so I can only assume he didn’t know Ser Jorah was the mole.

— Drogo gives an impassioned speech about giving his son the Iron Throne. He called Dany the moon of his life! And mentioned bringing the broken gods of the conquered back to Vaes Dothrak! Huzzah!

— Back in King’s Landing, Varys is saddened to tell Ned that Lord Renly has a lick of sense and fled the scene while the fleeing was good. Can’t wait to see Highgarden next season!

— I’m almost positive Cersei tearing up Robert’s last wishes is what does it for Ser Barristan. It’s a shame Petyr gets the final line of the episode. Was kind of hoping since Selmy wasn’t wearing a helmet it meant we got to see his epic bad ass escape from the Throne Room. NO ONE PUTS BARRISTAN IN A CORNER.