Game Of Thrones Veteran Recap: The Prince of Winterfell 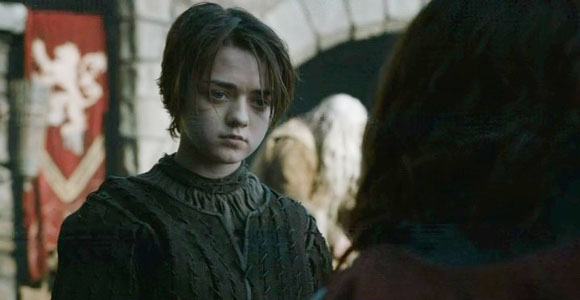 Editor’s Note: Here’s our weekly recap from Game of Thrones aficionado, Amy Ratcliffe. Spoilers from the HBO show and the book series to follow but if you’re looking to steer clear of information from the books, keep an eye out in just a minute for our newbie recap!

How is the end of season two of Game of Thrones almost here already? It’s too soon! With episodes like last night’s The Prince of Winterfell, I have every faith that it’s going to end on a wonderfully high note. I was quite pleased with the way this episode visited all the main character’s storylines without making it feel like choppy jumping around. It doesn’t seem like that would be possible with so many sub-plots to focus on, but this episode nailed it.

I had a hunch Catelyn would end up setting Jaime free after last week, but I wasn’t positive. It could have just been conversation, Catelyn could have changed her mind. Robb was not happy and Lord Karstark was less than thrilled (they’re setting up his eventual betrayal perfectly) with Catelyn deciding to try trading Jaime for her daughters. Robb is obviously conflicted about what to do and sets a full time guard on his mother. Brienne has the unenviable task of escorting Jaime back to King’s Landing, and their dynamic is playing out just as I heard it in my head while I read the books. They’re hilarious together; I’m looking forward to seeing more of their scenes.

Robb may be ticked at his mother, but he has someone to take his mind off troubling matters. He spends more time with the Lady Talisa, and their flirting eventually leads to him saying he doesn’t want to marry the Frey girl. Talisa doesn’t want that either. Robb ends up sleeping with her. I could see this going just the way it did in the books with Jeyne. Because Robb is so honorable, he’s not the type to sleep with a girl who’s not a whore without being wed to her. The wedding is bound to happen before the end of the season.

You can bet Robb still has Winterfell on his mind, too. Theon has had all the ravens killed so that no news is traveling in or out. His sister shows up though, and she calls him a fool for murdering the Bran and Rickon. She also has an uncharacteristic soft moment and asks Theon to come home with her. She sees what naïve Theon does not: all of the North hates him and once the news of the death of the Stark children has spread, no one will be able to save him. She doesn’t want him to die so far away from the sea. It was surprisingly sweet, and the actress playing Asha Yara couldn’t have done a better job.

Luckily for Theon, the North can only come after him for taking the castle. Bran and Rickon aren’t dead. As in the books, they faked everyone out with their escape and are actually hiding in the crypts underneath Winterfell. Silly Theon thinks it would be a good idea to offer the farmer who’s children he killed gold, you know, for his trouble. Oh, Theon.

Meanwhile in Harrenhal, Tywin realizes that the capture of Winterfell might be enough of a distraction to cause Robb to be off his game. He decides to leave in haste, and Arya realizes she should have asked Jaqen to kill Tywin. Duh. She tries to fix her error, but it’s too late. Instead, she tricks Jaqen (who said no to killing Tywin but then said he was bound to kill anyone she named, go figure) and names him and says he must kill himself unless he helps her, Gendry, and Hot Pie escape. He holds his word, and they walk out of Harrenhal shortly after Tywin leaves. 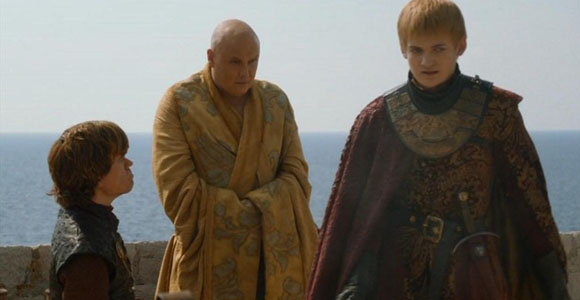 Not that I want Arya to have more to carry, but I wish they would have kept the part about her killing a guard to escape. Jaqen didn’t take care of all of them, and it becomes apparent that she has to do it. It’s just one more action that shows how much she has changed and how capable she has become.

King’s Landing is bustling with activity. They know Stannis is approaching, and Tyrion and Bronn are trying to determine the best way to defend the city. Bronn surprises Tyrion and Varys with his knowledge of cities under siege and points out that a lot of people will die not from violence but from starvation. He also gets to deliver several wisecracks and be the Bronn we know and love. We haven’t seen enough of him and Tyrion hanging out this season.

Joffrey isn’t concerned enough about the incoming attack (shocking), but he does at least plan to stand and fight. He thinks he’ll actually get close enough to Stannis to harm him. Cersei doesn’t want him in battle even though she has to know that it will inspire and encourage soldiers to see Joffrey fighting. Tyrion points this out, but Cersei only sees it as a plot to kill her idiot son. At first, part of me thought this was silly since she admitted how horrible he was last week, but I guess whatever he does he’s still her kid. She’s always going to want to protect him.

To make sure Joffrey is kept safe, Cersei warns Tyrion that she has discovered his whore and promises that if her son is injured, the whore will be too. However, she took the wrong one. She has Ros – who still seems to be one of the only whores in all of Westeros. I get she’s a familiar face but change it up once in a while. Anyways, you can imagine how Tyrion felt about this.

In the North, Jon meets the Lord of Bones (loved his costume) and discovers he’s not the only crow they’ve captured. The wildlings also grabbed Qhorin Halfhand; he and the other brothers were searching for Jon when they ran into trouble. Oops. Qhorin tries to turn the situation to his advantage though and tells Jon to become a double agent. The rest of the Night’s Watch is unaware of their capture, and Samwell and Grenn dig up a stash of dragonglass wrapped in a black cloak whilst digging latrines. Hey, someone has to do it.

Stannis and Dany also made appearances in this episode as well. They each got short scenes, but I’m just glad they appeared at all. Stannis and Davos are on the approach to King’s Landing, just a day away, and Stannis reminisces about how he was wronged by his brother, King Robert. He tells Davos that he’ll make him Hand of the King when he takes the Iron Throne. In Qarth, Jorah tells Dany he’s found a ship but she refuses to leave until she has her dragons back. I was surprised that Jorah saw that conversation going down any other way. He thinks she is crazy to willingly go to the House of the Undying.

A lot happened in this episode despite it being a lot of set up, and I feel like it was paced just right. We saw and learned a lot, but it wasn’t a deluge of information. It also didn’t feel crammed or rushed the way that several other episodes this season have. I think this may be the episode that’s stayed truest to the book other than the whole Lady Talisa bit. And even so, the spirit of that is the same or perhaps she’s lying about who she is. Based on the number of extreme changes, it was refreshing to hear some of the dialogue delivered directly from the pages of A Clash of Kings.