Game Of Thrones Veteran Recap: A Man Without Honor | The Mary Sue

Game Of Thrones Veteran Recap: A Man Without Honor 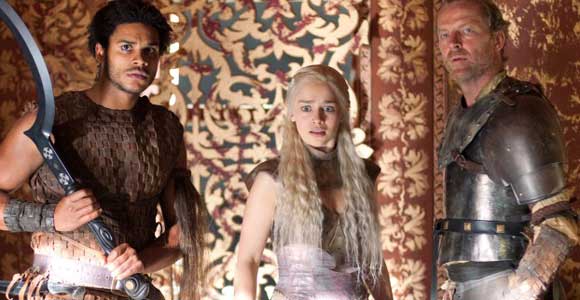 Editor’s Note: Last week we started down the path of the second half of HBO’s Game of Thrones Season 2. This week Amy Ratcliffe continues with her delightful recaps although we have a bit of a change-up. Amy’s post will include information from the George R.R. Martin novels throughout, but in just a few minutes we’ll have another recap up from Sarah Devlin, someone who hasn’t read the books. So read on if you’d like to know where the television show strayed from the source material and see what Amy thought about last night’s episode,  A Man Without Honor.

Just like every week, we travel all over Westeros and beyond in last night’s Game of Thrones. The season continues to move at an insane pace, and I felt like A Man Without Honor jumped from character to character fast enough to give me whiplash!

In the North, Jon realizes his female prisoner isn’t worth the trouble. Ygritte teases him mercilessly about his lack of experience with women, about his incorrect definition of freedom, and then the Night Watch’s no sex rule. And yes, she utters the infamous “You know nothing, Jon Snow.” She’s relentless, and it’s just the sort of prodding Snow needs if you ask me. She uses her womanly wiles to the extent that Jon is oblivious to the fact she’s leading him into a trap. She places him right in the middle of a group of wildlings. I have no clue how this is going to tie in with the very important moment to come with Qhorin Halfhand.

The Tywin and Arya talk show continues in Harrenhal. In this week’s segment, Tywin gives a meal to Arya and lets her sit at his table. He talks about wars and the importance of the family legacy. They discuss Harrenhal and history, and Tywin calls her out on lying about being a commoner. He even goes so far as to comment that Arya reminds him of his daughter.

As much as I love the information exchange and interactions between these two, I have issues with these scenes. Maybe they’re inserted to flesh out Tywin’s character, but I’m not sure this is the right way to go about it. I never got the impression that he was nice in the books and certainly not sentimental enough to treat a servant so kindly even if she reminds him of his daughter. Is it meant to be a balance to show a more decent Lannister? Whatever the purpose, he’ll be leaving Harrenhal for King’s Landing soon.

They’re preparing for war in the city. Well, Cersei and Tyrion are. They have word that Stannis has sent 200 ships, and the vessels will be arriving within five days (where’s Tyrion’s chain by the way?). I don’t think I’ve ever seen Cersei as vulnerable as she was talking with Tyrion about Joffrey. She admits she can’t control him and acknowledges that he is malicious for fun. She wonders if it is the price of her and Jaime’s sins.

We don’t see candid Cersei often, but when it happens, it’s almost always over her children. She doesn’t show her Achilles heel to many people, but Tyrion already knows about it. When Tyrion moved to comfort her, I was waiting for the figurative slap that only Cersei can deliver, but she was too distraught. I know she’s not as soft in the book, but since she does always express love for her children, it’s not a stretch for me to see her this way.

She shows her more honest side to Sansa, too. Sansa gets her first period and though Shae tries to help her hide it (not quite as dramatic as nearly burning the tower down in the book), the Hound sees the evidence. I bet he and Sansa disliked that moment almost equally.  Sansa knows this means she can bear children for Joffrey, and she’s terrified. Cersei tells her that she might not love Joffrey, but she’ll love the babies she has and those are the only people she should love. “The more people you love, the weaker you are.”

Tell that to Jorah. Everyone knows he’s in love with Dany, including Dany, and she tells him to back off and find her dragons. There may have been a few more words including a discussion about trust and how Dany isn’t giving it to anyone. When Jorah goes on his quest he runs into the mysterious lady with the mask – Quaithe – who knows not only about his feelings for Dany but also that Jorah betrayed her to Varys. When he promises never to betray her again, she tells him the one who stole the dragons is currently with Dany.

She is with the Thirteen, and Pyat Pree shows up and reveals that he has partnered with Xaro. The latter wants to be King of Qarth and so gave up the dragons to Pyat Pree. The warlock has taken them to the House of Undying, and after that announcement, he duplicates himself and kills the entire council. I’ll come back to that in a minute.

I am not thrilled with the portrayal of Dany this season in comparison to the book. I understand that she is frustrated; her khalasar has dwindled, she needs ships, and now her children have been taken. She’s floundering and panicking. Even given all that, she’s not being the Dany I know and love. She’s acting petulant and bratty rather than commanding respect. She’s taking on some of Viserys’ manners, and I don’t like it.

And what the heck is going on with Qarth? This is the storyline that has been changed the most. I can understand the House of the Undying taking the dragons to give Dany greater motivation to burn it to the ground. Pyat Pree murdering the Thirteen was completely unexpected as was Xaro’s power play to become King of Qarth. I’m guessing these events were inserted to make Qarth more spicy, and they can be forced into the bigger puzzle later. I have a crazier theory, too: maybe Dany’s already in the House of the Undying and these are her visions. 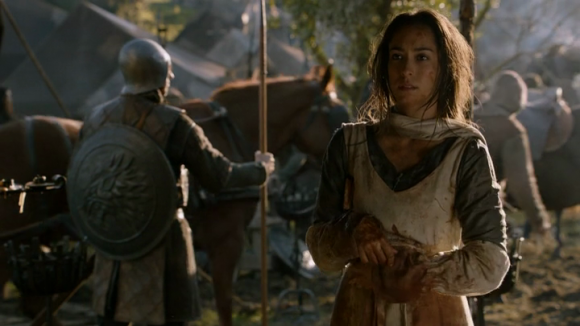 Back in Westeros, Robb is having his own lady problems. He keeps flirting with Talisa even though he is betrothed to a Frey, and his men are commenting on the fact that he’s expressing interest in a foreign woman. While he’s away on negotiations (with Talisa), Jaime almost escapes his cell and kills a guard, specifically a Karstark, in the process. He may win the prize for great lines and being deceptive for tonight’s episode.

When a distant relative of his is stuck in his holding pen with him, Jaime waxes poetic about memories of squiring and knighthood. Even though I know Jaime, I truly believed he was having a human moment. That is, until he killed his relative in order to distract the guard and attempt escape. He tells Alton, “My life has left me uniquely unfit for constraint.” Then he bashes Alton’s head in. That didn’t happen in the book, and I’m not thrilled about making Jaime more unlikeable. He needs to get to a point where we can believe he has a conscience and wants redemption and the events in this episode mean we’ll automatically distrust him in future.

After he is recaptured, he has a face off with Catelyn. This is moved up a little in comparison to the book, but I’m okay with that. The hate they hold for each other is palpable, and Catelyn delivers lines with such venom that I feel like she could take off Jaime’s head at any minute. I’m very much looking forward to more scenes with those two and Brienne in the future.

Finally, the episode started and ended with Theon. Or as I like to call him, the weaselly jerk. When he realizes Bran and Rickon are gone he leaves on horseback with his men hounds to find them (this is when the kennelmaster died in the book, but Rodrik took his place in last week’s episode). When Maester Luwin points out that he’s being heartless, Theon says it’s “better to be cruel than weak.” He’s fumbling into who he thinks he’s supposed to be and though he’s just playing a part, the process is making him evil instead of just being a bully.

He completes his turn to the Dark side by seemingly killing Bran and Rickon with fire. You and I know it isn’t really the Stark children, but it is kids. Theon murdered innocents in order to get suitable substitutes for the Starks. I don’t think there’s any turning back from that. Much of this paralleled the books, minus the lack of Meera and Jojen.

Even though I’m not pleased with Dany’s attitude, this episode did reinforce the power of the Targaryens. Arya brought up the Targaryens and their dragons in reverent tones while speaking with Tywin (they destroyed Harrenhal), and it came up when Catelyn and Jaime talked. The name is not dead in Westeros, and despite the actions of the mad king, it still can command respect. That’s nothing to sneeze at, and it makes you think that Dany’s last name will indeed get her a few places.

Overall, I enjoyed the episode as long as I don’t obsess over the book too much. It’s a wonderful  TV series, but it’s wavering a teensy bit on the adaptation. Even though it’s incredibly fast paced, I like that we’re starting to get scenes that last less than a minute. We’re getting more information that way and switching up the scene lengths makes up for the fact that you don’t really get any time to take a breath. When it comes to Game of Thrones, I’m okay with less breathing in favor of more story.