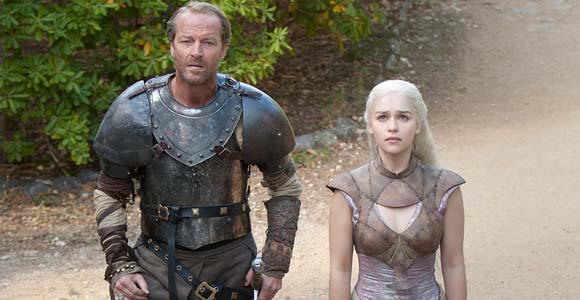 Editor’s Note: Contributor Amy Ratcliffe is here with her veteran recap of last night’s season finale of HBO’s Game of Thrones. Hit the jump for her thoughts on the extended and feel free to leave your own in the comment section. And oh yes, there will be spoilers!

Ten extra minutes. Can we please get that much extra time in Westeros every week? [Editor’s Note: Seconded!] Valar Morghulis had a lot of points to touch on to wrap up the season, and it just barely managed to cram them all in. Though I am happy we got to spend an entire episode on the Battle of Blackwater Bay, I can see we paid the price in the season finale. I enjoyed it and felt some parts were completely awesome, but I could feel the rush to visit each character and wrap up storylines.

King’s Landing is saved, and King Joffrey hands out rewards. He’s got one for his father, for Littlefinger (he gets Harrenhal, woohoo, a dead city to call his very own), and Loras Tyrell. Loras asks him to take Margaery’s hand in marriage, and after some blustering protesting, Joffrey agrees to put Sansa aside and go with the girl who wears gowns that reveal her cleavage. As you can imagine, Sansa is thrilled to be released. Her happiness is short lived; Littlefinger points out that Joffrey is not the type to give up his toys. Eww. He promises to help get her home, and after all, he’s so trustworthy.

And Tyrion, poor Tyrion. What does he get for saving the city? Not a darn thing. He was moved to a smaller chamber since Tywin’s around to take office as Hand of the King, and he’s not in good shape. Varys visits and lets Tyrion know that Cersei paid Mandon Moore to kill him and since he failed, Tyrion isn’t safe. The Imp is dismayed to learn that the Hill Tribes have departed the city and Bronn is no longer in charge of the City Watch. I hope Bronn hasn’t left the city, but we didn’t see him get a knighthood like he does in the book, and it’s not like he can choose the flaming chain as his sigil (well he could, but it wouldn’t make a lot of sense).

Shae is still in King’s Landing, and she asks Tyrion to leave with her to go to Pentos. She wants to get him away from his crazy family. Tyrion admits that he likes playing the game though, more than he’s liked doing anything. He wants to stay. And when she says she’ll stay too, Tyrion hugs her tight and it’s so sweet it hurts. You don’t see Tyrion looking vulnerable often – if ever – and seeing him lose it over losing everything was distressing.

In Winterfell, Bolton’s men have the castle surrounded and Theon knows he can’t win. Maester Luwin is still trying to help Theon because as he tells the kid, “You’re not the man you’re pretending to be.” He counsels him to run away and join the Night’s Watch. You can tell Theon considers it. He talks about being a captive and going home only to be looked down upon; it might be the first time he’s been genuine and bare. It got to me. Still. The idgit ignores Luwin and gives his men a rousing pep talk about fighting the Northmen. At first it looked like they were behind him 100% but they really don’t want any of it, and in a moment that was more hilarious than it should have been, his first mate knocks him over the head and puts a hood over him. The funny moment ends with a slap in the face as he also stabs Maester Luwin with his spear.

Bran, Rickon, Hodor, and Osha emerge from the crypts soon thereafter to find Winterfell in ash and ruins. The direwolves lead them to the Godswood where they find Luwin dying. He tells them to leave before men return to the Castle and to go North to find Jon. Oh, there were tears. This is a series when people die left and right, I know, but this scene was especially heartbreaking. These poor Stark kids go through so much. I found it interesting that the people who burned down Winterfell weren’t identified. The books came right out with the fact that it was the Boltons, but the episode left it a vague mystery. 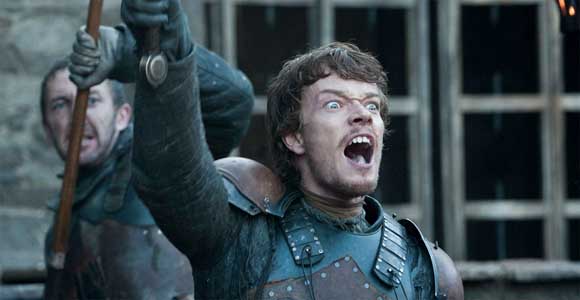 Arya has an interesting path ahead, too. Jaqen H’ghar finds her on the road and says he can take her to Braavos so she can learn to be one of the Faceless. She says she can’t go because of her obligations to her family. He gives her an all access coin, and all she has to do to use it is give it to a man from Braavos and say, “Valar morghulis.” All men must die. He says good-bye and changes his face. He changes his face! I was worried we weren’t going to get to see that.

Like I said, some scenes went by in the blink of an eye. We visited Robb’s story in a heartbeat. He weds Talisa despite Catelyn’s caution not to go against his word to the Freys. Robb says he loves her, but I’m missing the chemistry (no mention of him doing it for honor because he slept with her). We stopped for a moment with Stannis and Melisandre, and she showed him his glorious future in the flames. Varys has a heart to heart with Ros, “the only whore in Westeros” (I only refer to her with that title now). Brienne kills three Stark men who recognize Jamie Lannister. She takes them down so handily that she impresses Jamie.

One of the morals you should have taken from this episode was never to tick off Daenerys Targaryen. You probably already knew that, but in case you didn’t, the cold revenge she visited upon Pyat Pree and Xaro in the episode was a severe reminder. Her dragons burned Pyat Pree when he threatened to keep her forever in the House of the Undying with her dragons to fuel his magic. She left Xaro and her (alive!) handmaiden in his empty vault after discovering them together. Even though I was very happy to see Dany kick butt and take names again, it still fell short for me. Where was the burning House of the Undying? Where is Ser Barristan? What about those sort of important prophecies?

Again, dragons burning the warlock was freaking awesome. The visions in the House of the Undying were beautiful, and the moment with Khal Drogo was sweet (more tears). But overall, her story fell flat for me in this episode and for the whole season. Granted, she is my favorite character from the books so I’m biased. I’m also left will a silly but important question: her handmaidens are all gone now, who is going to braid her hair?

In the North, Jon and Qhorin are on their way to Mance Rayder. Qhorin breaks his bonds, and after the Lord of Bones agrees to let them fight each other, Jon kills Qhorin. This is to make the wildlings trust him so he can become a double agent. That groundwork wasn’t laid down like it should have been though. The people in my viewing group who had not read the books weren’t quite sure what went down since it was only hinted at once and briefly. It didn’t feel nearly as important as it should have.

And then, the chilling end. Sam, Grenn, and Dolorous Edd are working at another unglamorous task when they hear the horn blast. One, two, then three. Three means White Walkers. Tons of them are headed towards the Wall. I could feel my eyes getting wider and wider, and I held my breath on Sam’s behalf (he got left in the dust by his brothers). It was a chilling note to end the season on. As for the appearance of the Others – they reminded me of a character I’ve seen in some World of Warcraft promo. The undead horse freaked me out more than anything.

The first season ended with Daenerys giving birth to her dragons. We saw a little of them and only a bit of magic sprinkled throughout the season. I hope the fantasy elements are more evenly distributed next season instead of so many being saved for the last episode.

In the end, a lot was changed from the books for this season. It’s inevitable. Some plots have to be sacrificed for better television. I don’t care that Ser Dontos wasn’t around. I’m even okay with the scenes that humanized Tywin just because his and Arya’s conversations were so darn interesting. It would have been more powerful for Theon to lose Winterfell because of Reek’s betrayal instead of just getting knocked out, but that doesn’t get to me. As I mentioned earlier, I don’t like the way they handled Daenerys and Qarth. I think she was made into a spoiled brat who didn’t get to do much. I also disliked the changes North of the Wall. Jon’s arc didn’t have as much weight as I wish it would have.

There is no doubt I’m looking forward to next season, but given how much crazy stuff happens in A Storm of Swords and keeping the changes from this season in mind… well, I’m going in with a few reservations. I can’t wait to hear if they decide to split the events of the third book into two seasons. It definitely merits the extra episodes.

Until next season, fire and blood.