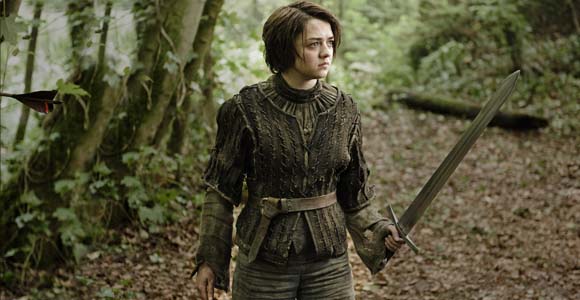 I had the opportunity to hang out with Maisie Williams at a Game of Thrones event last year and she’s just as awesome as you’d imagine. And having read the books, it only makes me that much more excited for what’s to come for her character, Arya. A recent interview had her touching on topics like the upcoming season, fans, and the Red Wedding.

The young actress spoke to the Sante Fe Reporter while in town to hang out with A Song of Ice and Fire writer George R.R. Martin for his special Game of Thrones marathon at his theater. She mentioned not reading the books but they discussed the Red Wedding, which occurred last season:

People who had read the books, I guess, knew it was happening a long time before, but when it actually happened, we had to stick to it. It’s tough for a popular TV series to kill off its main characters, that’s kind of risky, but I’m cool with it. It is sad that I don’t get to see Michelle [Fairley] or Richard [Madden] anymore, but it’s great for the story, I think, because it keeps people interested and it takes you away from that cliché of the good guy always winning. Also, just because there are books written, it doesn’t always mean that we’re gonna stick to that in the series. It is an adaptation, so really, no one is safe.

Though she wouldn’t give away any “OMG” moments for this season, we think we learned something from the SF Reporter asking about Braavos as a good summer vacation spot. The actress replied, “I keep asking David and Dan what’s gonna happen on that bit or if they’re gonna change it, but they’re keeping very tight-lipped about it. I could use a little sun, really. That’s all I want.”

So it looks like Arya definitely won’t be living in Braavos at all this season, though we previously surmised she might travel there in the finale.

I’ve heard some other cast members have encountered crazy things, but being in the UK for most of the time, I don’t meet too many, like, hardcore fans and I’ve never had anything too weird. The weirdest stuff is usually on Twitter—like, strangers asking you to marry them—I haven’t had anything too strange actually in the flesh, so I’ve been one of the lucky ones. I guess it’s easier for people to say stuff on the Internet, because it’s like you’re talking to a screen rather than an actual person.

Don’t we know it.

Fans certainly have a great attachment to Arya but how does Williams feel about the trajectory she’s taken the last three seasons? She said she’s shocked at how ruthless Arya’s become.

How ruthless she’s become. She’s always been a fan favorite because she’s kind of funky and she says what she thinks and feels and stands up to some pretty evil characters—I think that’s kind of sweet. And then you get to see this other side to her, where she becomes more brutal and a lot more ruthless—I think it’s a little risqué because this lovable character that you used to know is now taken away and she’s not quite as appealing anymore, maybe. She’s a little bit more…scary.

I am so looking forward to this season.