My Life Is A Lie: We’ve Been Saying Khaleesi Wrong and Other Game of Thrones Language Trivia 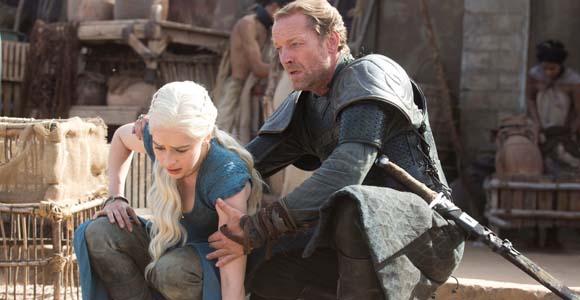 In case you weren’t aware, the fluent High Valyrian we’ve been hearing in Season 3 of HBO’s hit series Game of Thrones is completely made up. Much like the Dothraki language, author George R.R. Martin had a few words of the lost city’s tongue in his novel series but it’s David J. Peterson who made it speakable. There’s just one problem, us fans aren’t as fluent as we’d hoped.

While watching the latest episode and hearing actress Emilia Clarke speak the word “Dracarys,” I thought to myself, “Oh, hey, that sounds different than last time, I wonder if that has anything to do with them formalizing Valyrian for use this season.” And sure enough, that’s the case. Peterson started on Valyrian early after trying to come up with a Dorthraki word. Since Valyrian is akin to Latin in our world, he simply borrowed the new word for Dothraki.

As to the epic vocal performance by Clarke in “And Now His Watch is Ended,” Peterson was happy to hear it. “I was delighted by Emilia Clarke’s performance. She really does speak High Valyrian like a natural,” he wrote on his blog. “She missed a word or two here or there, but such will happen. Overall, I’m extraordinarily pleased.” He also praised Dan Hildebrand, who plays Kraznys and speaks Low Valyrian, “He tends to devoice a lot of the fricatives, but I take that purely as an idiolectal variant. He’s very convincing.”

But here’s the crazy part, even though Daenerys’ title of Khaleesi was used fairly early in the series, everyone has been pronouncing it wrong. Vulture writes:

The more accurate pronunciation should be “KHAH-lay-see,” not “ka-LEE-see.” That’s according to David J. Peterson, the language creatorresponsible for all of the Dothraki and Valyrian dialogue spoken on the show, and he’s driven mad every time he hears it. “Ugh. God. That’s not how it’s supposed to sound,” said Peterson. “The vowel change bugs me.” As the architect of the language’s grammar and pronunciation rules, he’s the only one who can correct it with authority, but he lost the battle to correct the pronunciation on the show early on. “The producers decided they liked the other way better. They probably thought most people were pronouncing it that way anyway, which is true.”

Yes, Peterson is very specific about how his languages are used but we can’t blame him, he’s been making up languages for a while. Vulture writes, “Peterson, who has a masters in linguistics from the University of California–San Diego and founded the Language Creation Society, spent twelve to fourteen hours a day, every day, for two months working on the proposal that landed him the Thrones job. When he was finished, he had more than 300 pages of vocabulary and notes detailing how the Dothraki language would sound and function.”

Even though his passion is enough, Peterson also stays on top of things thanks to fans and Martin himself. He’s constantly worried dedicated fans who’ve taken the time to learn Dothraki or Valyrian will catch a mistake and Martin has been asking him to translate bits for The Winds of Winter. “He’ll e-mail me once in a blue moon, and then I’ll reply and I won’t hear back,” he said. “He’s a busy dude. I’ll have to wait to see if he used anything when it’s published.”

I’m not the only one who’s been practicing Dany’s speech…right?