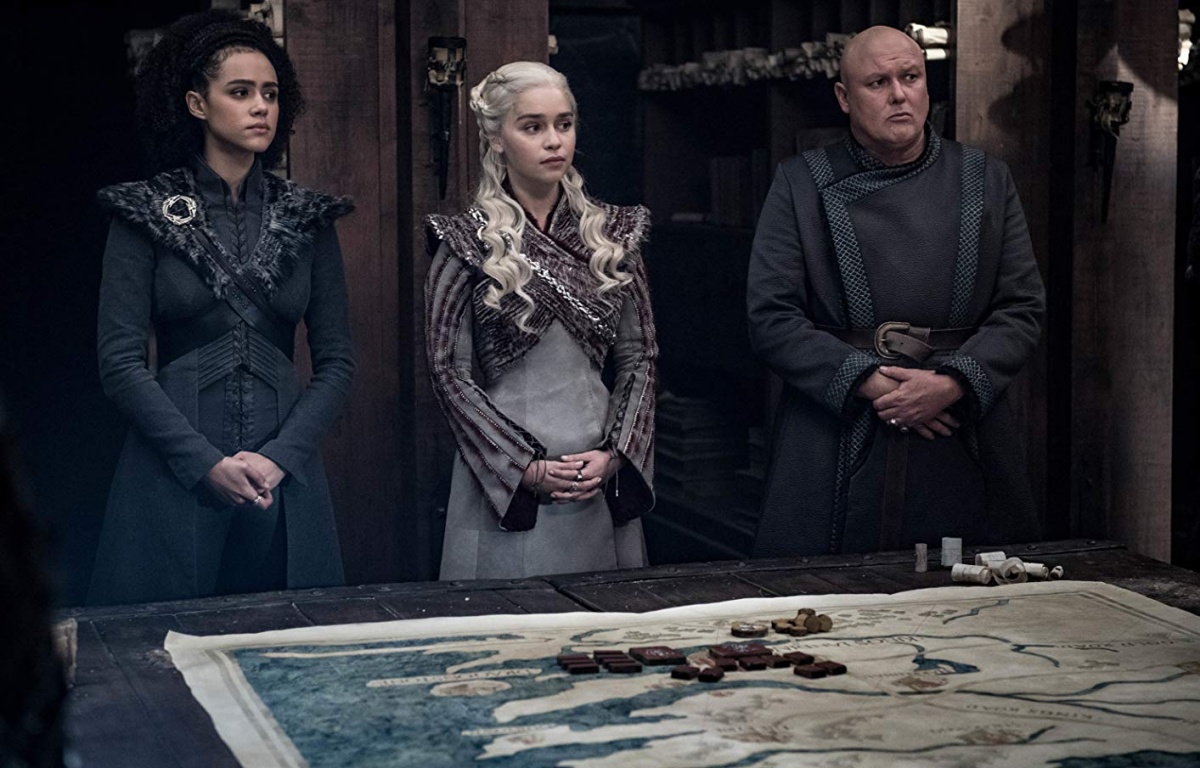 It is a comfort to know that despite only two episodes left, the writers behind Game of Thrones can still craft sexist, racist, and dull storylines that do very little justice to their characters, the universe, and its diverse fan group. Yup. Smells like 2019.

Man what an episode. After getting to see Arya defeat the Night King and all the acts of heroism from the main cast, so it is only fitting that this most recent go-round, we’re now back to the human threat—and the show begins to treat its other female characters like trash all over again.

Dany has lost most of her troops and her longest companion in Jorah, yet is surrounded by strangers (for some reason Missandei isn’t in any scene here, but we shall get to that), and hearing Jon get called a “madman” and a “king” by men for flying on a dragon, something that Dany has been doing. She tries to reconnect with Jon, which is easier for her to do because she’s used to Targaryen incest being a thing, but Jon being Jon can’t move past it.

Dany begs, and I mean begs, for Jon to not tell anyone about his heritage, because it’ll lead to problems and a threat to her rule, even if Jon doesn’t want it. Part of knowing her history is Dany being familiar with the Dance of Dragons, the Targaryen civil war between a female and male heir to the Iron Throne.

Jon being Jon spills the beans to Arya and Sansa, which leads Sansa to go full Littlefinger and pass it along to Tyrion, knowing that it’ll be spread around and threaten Dany and Jon’s allegiance. Dany then has another dragon shot down from the skies, followed by being forced to watch Missandei be beheaded. It’s a terrible-ass day. What’s even worse is that we have a conversation between Varys and Tyrion about Dany and her being fit to rule.

Now, as I’ve said before, Dany is a complex character. She has an imperialistic, self-righteous streak, but as Jorah once said, she does in her nature have a gentle heart. So it was deeply uncomfortable to hear Varys say that Jon is a better pick because he’s even-tempered and has a penis. Not only is deeply sexist, but it completely ignores all of Dany’s character complexities and props up Jon in a way that show!Jon has never earned. He’s not a great leader, has no ability to plan, and can’t even manage to keep a secret for more than two seconds. To essentially ruin Dany’s life, her claim, her friendships, and other bonds, in order to make a case for Jon as the true heir and better pick is grossly terrible writing.

Speaking of terrible writing, Sansa and Sandor Clegane finally get to speak, despite having been in the same space for such a long period of time. While I was so glad to see them together, when Sandor says that if she’d left with him on the night of Blackwater, she never would have been sexually violated and abused by Littlefinger and Ramsey, her response was that if she hadn’t been through all of that she would have been a “little bird” all her life. Oh, so her entire character development and growth as a player is all because of her being assaulted. Great. Thanks. Cool. Cool.

Brienne and Jaime finally get to consummate their relationship, sharing a powerful intimacy. Only to have Jaime, in the end, choose to go back to Cersei, as Brienne stands there in a coat crying and begging him to stay, while he lists all the reasons he was a bad person for Cersei. Great. Thanks. Cool. Cool. I’m glad Brienne got to share her virginity with someone who abandoned her for his damn sister. That’s not terrible at all.

Finally, Missandei. Somehow she manages to get captured by the Greyjoy fleet and is put back into chains by Cersei as a hostage against Dany. Tyrion attempts to appeal to Cersei’s humanity and avoid the young woman’s death. Now, let me ask this question? Why in the seven hells would Tyrion think that Cersei would do anything good? She already lied to his face. She already proved she’s horrible. Why is Tyrion like this? Oh right, because D&D are determined to make him a total good guy even though that was never his character. I forgot.

Anyway, Cersei isn’t giving up because she has zero fucks to give, and tells Missandei to say her final words before being beheaded by the Mountain. She says, “dracarys,” aka burn all these assholes to the ground.

The optics of this scene are gross. Not only have we just watched almost all the Dothraki get destroyed in the last episode, but we lose Missandei in a way where she has no agency. I didn’t expect her or Grey Worm to live, but if she had to die, would it be so much to have her last scene not be where she is in chains? I would have preferred if instead of getting her head chopped off, she chose to jump to her death free rather than just die chained. It’s bad.

I just. Ugh. I can’t believe this is how they have chosen to wrap up this story. We have two episodes left, and Dany is gonna get to burning, but that is going to be held against her, and I wouldn’t be surprised if she dies and Jon ends up king. Which … gross. I go back and forth about seeing Dany on the Iron Throne, but if this is how she loses, I’m not satisfied at all.