Yes, 12 Gallons of Milk Is a LOT, but Let’s Talk About What’s Contributing to Inflation 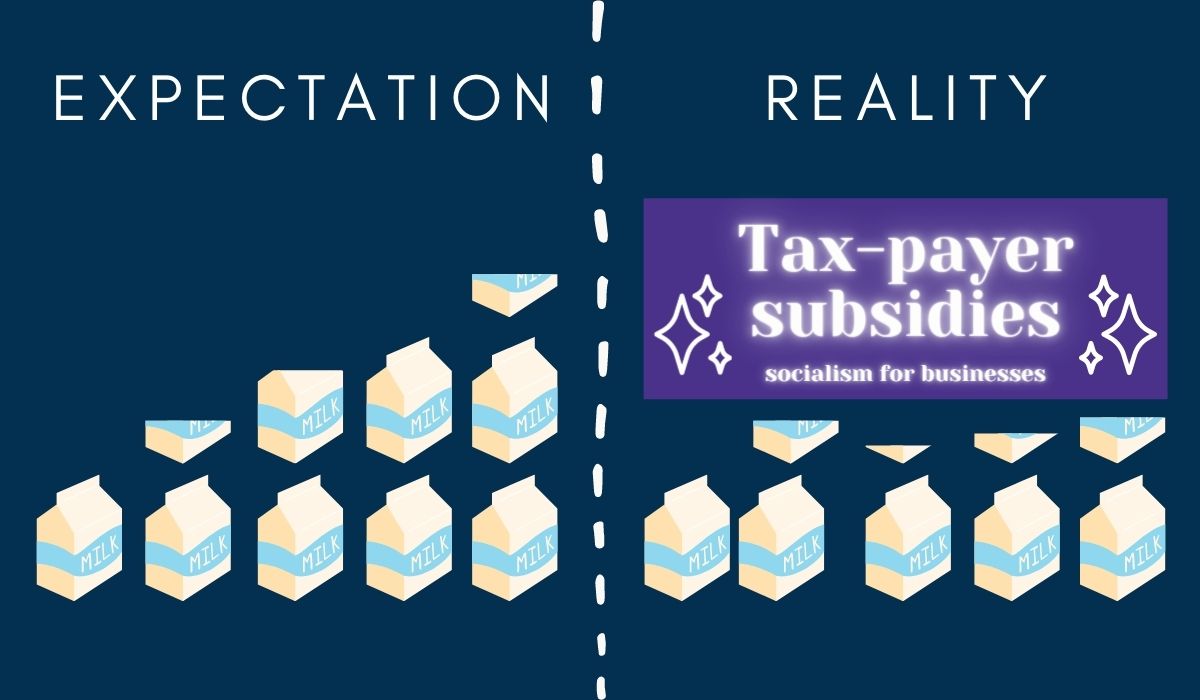 Despite the inflation and market instability affecting most of the world, many are quick to point at a handful of politicians in whatever camp they aren’t in as the reason for a rise in prices. In this pursuit, cable news is turning to so-called average American (almost always white) families to see how inflation is affecting them. One CNN segment prompted “milk” to go viral last week.

“A gallon of milk was $1.99. Now it’s $2.79. When you buy 12 gallons a week times four weeks, that’s a lot of money.”@EvanMcS goes grocery shopping with the Stotlers and shows us how badly inflation is hitting the middle class. pic.twitter.com/39hPPRHLja

Because I live in southeast Texas and we have an economic barrier due to petrochemical plants (don’t get me started) and the Port of Houston, I was hesitant to chime in. Anything regarding how much something costs on an individual level is foolish in most cases, and especially for where I reside compared to middle American and coastal cities. However, zeroing in on any of these places without context helps no one, and that’s exactly what CNN did.

While a lot of people dunked on the idea that anyone would need 12 gallons of milk per week (despite the video showing the size of the mostly adopted family), it didn’t stop there. The conversation widened to the framing of the story and little-to-no fact-checking on CNN’s part.

Framing-wise, they chose a family that is over four times the size of the average household (11 versus 2.6), and without inherited wealth, even in pre-pandemic times, it’s unlikely they’d have enough money to make ends meet if they were truly middle class. Rumors flew around saying their house was a half a million dollars (that is big in Texas), but I couldn’t verify any of that.

Since the backlash and questions of why people spend so much of their budget on a quickly expiring drink (which, by the way, you are supposed to limit drinking in general), all hell has broken loose. CNN defended the story, the journalist who covered the story is calling people “assholes,” and Fox News turned the story into “libs make fun of struggling family.” While the last two can be true, this story still never ran numbers on what the Stotler family said. CNN didn’t follow up with regional trends or national trends.

The story ended on milk while omitting that the U.S. HEAVILY subsidies dairy products, including milk. The reason we even feel like we need the drink in our diet comes from a history of subsidizing the product after a war surplus.

We come to you again not wanting to defend President Biden, but this isn’t his fault—or at least not his alone. Donald Trump’s administration is owed a significant portion of the blame, but really, this is an amalgamation of a lot of issues (and general changes) over decades then exacerbated by pandemic and recovery efforts. Crash Course always coming through with a refresher, here are the basics of what inflation is and what causes it. (Keep in mind this was made in 2015, both before the current pandemic and an even wider income gap in the U.S.)

As the video outlines, inflation is pretty normal for most stuff. It is the sudden shifts that get people in a frenzy. However, again, that is not even happening right now. Some of the inflation we’re seeing is seasonal and exacerbated by climate change, but much of it is related to the labor market, global supply chains, and COVID-19.

Employers kept wages stagnant, but the cost of everything went up. Sprinkle in gentrification, college debt reaching 1.7 trillion, and “the great reshuffling” (remote, high-earning workers buying up affordable houses outside their usual areas)—and it gets bleaker. I bring those up because building home equity and getting a good-paying job being bricks in a foundation to the American Dream was yet another failed promise—one that affects inflation.

Why is the economy all screwy right now, then?

There are a number of issues for inflation, many of which we probably know about but didn’t necessarily see how they were connected. Plainly, there is a supply and demand issue when it comes to goods and labor. When the supply of workers is down, but the 1) demand for their services rises and 2) the worker’s cost of living adjustments are still catching up to pre-pandemic struggles, inflation will happen.

The workers are seizing … the moment – People are retiring early if they can, and there were already issues, pre-pandemic, of certain sectors not being able to attract younger talent. While there is no general strike, workers everywhere are striking, in every district, regardless of what party runs it. Coal miners, John Deere factory workers, Kellogg’s workers, McDonald’s employees, and many more. Until recently, Nabisco workers, too, held a strike.

Outside of strikes, employees of Starbucks, Dollar General, students workers on college campuses and more are struggling to unionize. All of this discontent comes from a wider wealth gap. Big business just complains that no one wants to work and pushes to tweak working age laws across various states.

It’s been over six months since we got our last measly $600 check and a few months since the last time many received pandemic-related unemployment, but like clockwork, every other day, it is a cable news host, “small” business owner, or document typed up on a window saying people don’t want to work, as though workers are to blame for unfilled jobs.

Caregivers – A lot of people have turned away from working to be caregivers in a country that leaves them little choice otherwise. Many two-parent households made the choice for one parent to stay home, to help kids with school or elderly people. Caregivers for those disabled, elderly, and very young are underpaid, and the first two were working with two very at-risk groups for COVID-19 last year. Many of these people are living in intersecting vulnerable positions such as being economically disadvantaged, immigrants (undocumented or otherwise), and people of color.

There’s still no maternal or paternal federal leave program, no monetary aid to compensate workers (just to get by, at least) that must stay home and take care of a sick loved one. This has disproportionally affected women due to social conditioning and the fact that since we are often paid less, between two cis, straight adults, it makes financial sense to many to just keep the higher earner at work.

COVID-19 deaths and long haulers – The numbers range incredibly, but somewhere between 20–70% of people who had COVID-19 (even if they were initially asymptomatic) experience one or more long-haul symptoms. With the conservative estimates showing 46 million people had/have COVID-19 in the U.S., that would mean at least 9.2 million people have one or more pre-existing conditions because they had/have COVID-19. Already a larger population than NYC and not accounting for the 751,000 deaths, that will cause disruptions, and they will be ongoing. Like strikers, and people leaving to be caregivers, there is yet another place in the labor market people are missing—and unlike the first two, these are harder or impossible (death-wise) to bring back.

This means, on top of the millions of people already uninsured or under-treated, more people will have a greater need than before. This is without accounting for the effects of climate change. Early on in the pandemic, it was pointed out why tying healthcare to employment was a bad idea, and here we are a year later with more people in need and no plans for universal healthcare insight, due to big pharma paying politicians to halt even a crumb of reform.

The supply everyone acknowledges

While laborers are not recognized as an essential part of the supply chain needing investment, the product is of value. Because for many businesses, the product is what people spend money on. The global supply chain issues affecting many countries worldwide is causing a delay in parts and finished products from reaching their final destination, be it a store shelf or school cafeteria freezer.

Part of the supply chain issues again come down to labor because even if you get the products on the shipping boat, they cross several hands in transit. Okay, so knowing there’s a shortage of truck drivers, yeah, this is gonna be worse. I’m not even counting the Suez Canal mess. Global trade, except necessities (both to live and to work/learn remotely), slowed because of the need for social distance, dock workers getting sick, and rippling supply chain issues in our interconnected world.

To his credit, the Biden Administration is working on the backed-up southern California ports, which is all you can really do. Even then, that will require a lot of labor and overtime … from where?? Two-day shipping (Amazon) spoiled people, and Louis DeJoy is still the postmaster general, meaning the U.S. Postal Service is slower on a household parcel level, too.

If packages aren’t coming on time, (more so for smaller businesses) then that will create greater stress and lower profits unless they can convince more people on a budget to pay more for their product. Just like the economy is interconnected with other economies, labor demand is interconnected with products, and if that isn’t consistent and steady, it makes other segments of the economy more volatile.

Just as not one person caused all of these problems, not one person can fix them. They are systemic, and while COVID-19 is new, its effects on the economy are merely highlighting the U.S.’ years of exploitative labor practices and disregard for people’s health from all sides, which are as American as apple pie with a glass of milk.