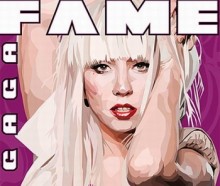 Yesterday, Comics Alliance’s Chris Sims at once destroyed and showed his appreciation for Bluewater’s recently released Lady Gaga comic, calling it “not very good” as a biography, given the river of randomness that runs through it, but admitting his respect for writer Dan Rafter, who defiantly refused to phone it in, as easy as it would have been to do so.

Dan Rafter is working with the underlying themes that people like about her music and the way she presents herself: glamor, identity, the lure of fame, the malleability of gender, irony in modern society. It’s a first-year psychology textbook, yes, but it has more to do with Lady Gaga and her success than knowing she went to NYU, and it’s presented in a way that actually layers it into a fictional narrative. And that makes it easily the smartest biography Bluewater’s produced.

So. Humoring the possibility that you are on the fence about purchasing such a thing, our sister site Styleite has assembled a few snippets from the comic that may either pique your interest or have you headed for the hills.