Burning Paper Effigies of Gadgets to Honor the Dead 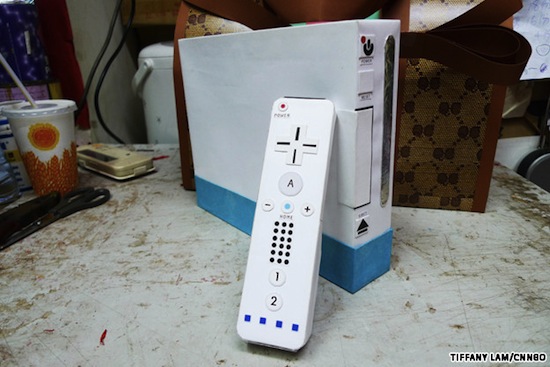 In China as in much of East Asia, tradition has it that burning paper effigies of desired objects will bring comfort to those who have passed on in the afterlife. CNNGo reports on the trade of one Hong Kong shopkeeper named Au Yeung Ping Chi, who has revamped his father’s effigy business to incorporate paper gadgets like Wiis, cameras, DDR machines, and iPhones, as well as luxury items like designer clothes and handbags.

Because the effigies have deep personal import for the families of the dead — especially keeping in mind that many passed away at “tragically young” ages — Au Yeung puts great effort into crafting effigies that may be burned almost as soon as they’re bought.

“Sometimes their stories are heart-wrenching and sometimes I’m numb to them. I try not to pry,” says Au Yeung. “Making paper effigies of trend items makes death seem less frightening.” His most popular requests are for cameras, video games and brand-name handbags — the things that Hong Kong kids desire while living.

Each of Au Yeung’s unique creations take many hours to research and complete. Once sold, customers take them to gravesites and burn them to ashes in a matter of seconds. Au Yeung says his own special goodbye to each effigy by taking photos of them. “I have to remind myself that they are meant for people in the underworld to use,” he says.

CNNGo has more photos of these surprisingly affecting paper goods.

(CNNGo via The Awl)