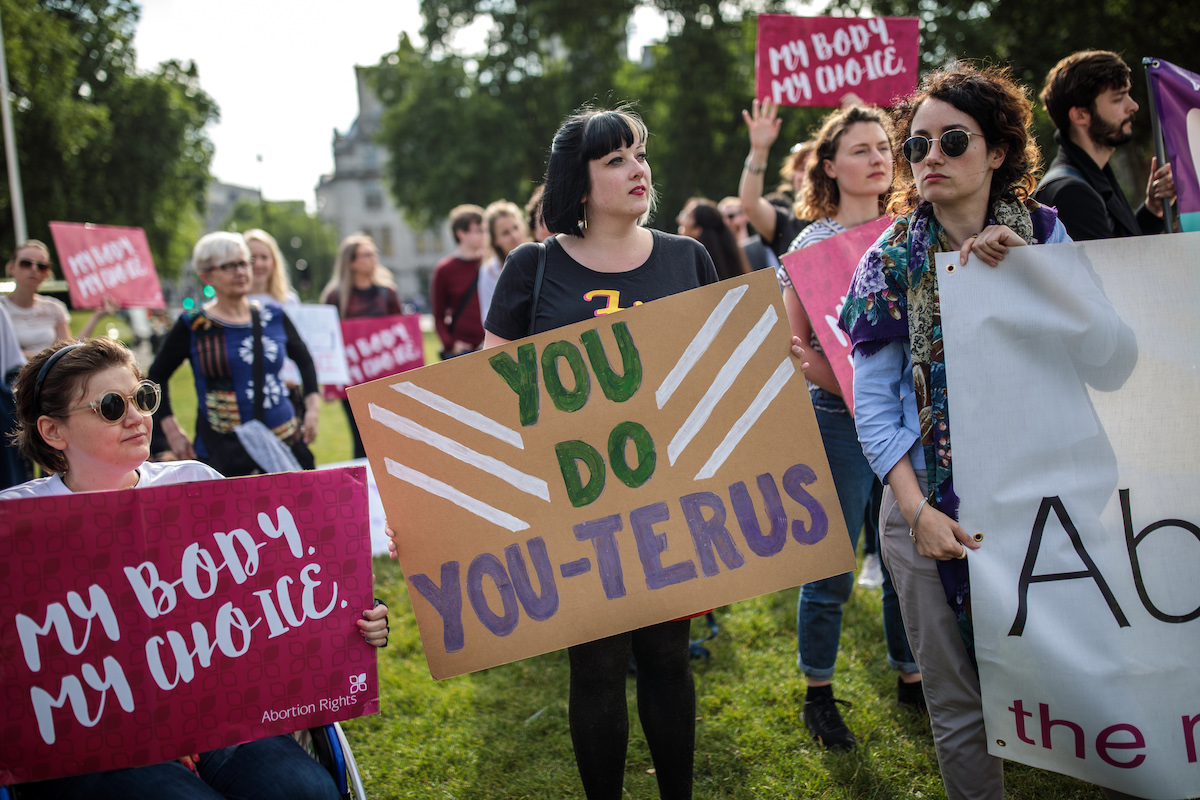 The never-ending attack on reproductive rights has been pushing full steam ahead in recent weeks. (And, well, in all weeks.) Between Donald Trump’s domestic gag rule, to the entirely misleading fearmongering around later abortions, to the Alabama judge who accepted a man’s lawsuit on behalf of an aborted fetus, it’s been an exhausting time.

Also on the list of recent attacks: The Georgia House approved HB 481, a “heartbeat bill” that would ban abortions once a fetus’ heartbeat is detected. It also “recognize[s] fetuses as natural persons who qualify for state income tax deductions and state population based determinations.”

A fetal heartbeat can usually be detected around six weeks after conception. Many people don’t even know they’re pregnant by that point. The bill itself is unconstitutional. But, as Democratic Rep. Dar’shun Kendrick tells Rolling Stone, that’s deliberate. The goal is to get the bill to the newly conservative-dominated Supreme Court.

“It’s unconstitutional on purpose: this is a test case,” says Kendrick. “It is a case to test Roe v. Wade. They’re hoping that it gets up to the Court of Appeals — the Eleventh Circuit is one of the most conservative court circuits that we have, and they’re hopeful that they will uphold part of it, and then they’ll take it all the way to the Supreme Court. They know exactly what they are doing. This is intentional.”

So Kendrick has come up with her own probably unconstitutional, definitely oppressive legislation: the “Testicular Bill of Rights.”

Ggggooooodddd morning! Introducing my “testicular bill of rights” legislative package. You want some regulation of bodies and choice? Done! pic.twitter.com/5E8HBRSc9l

The legislative package, which she tweeted out this morning, would require men to receive permission from their sexual partner in order to receive erectile dysfunction medication. It would ban vasectomies under threat of the same punishments listed in HB 481. It would declare sex without a condom “aggravated assault.” It introduces a 24 waiting period for men looking to purchase porn or sex toys. But my favorite part, and the point that most directly corresponds to anti-abortion “personhood” bills, it would “require DNA testing when a woman is 6 weeks and 1 day (to be performed before she is 8 weeks) to determine the father of the child who shall IMMEDIATELY start paying child support.”

This isn’t the first time something like this has been proposed. Earlier this year, a group of female Democrat lawmakers proposed a vasectomy ban in response to a bill that sought to move the deadline for an abortion from approximately 24 weeks up to 20 weeks.

The response bill’s author Yasmin Neal said in a statement, “Thousands of children are deprived of birth in this state every year because of the lack of state regulation over vasectomies. It is patently unfair that men can avoid unwanted fatherhood by presuming that their judgment over such matters is more valid than the judgment of the General Assembly, while women’s ability to decide is constantly up for debate throughout the United States.”

Kendrick says this new bill is 100% serious and she’s expecting a draft of the legislation by the end of this week. It’s also, obviously, not meant to actually pass a vote. It’s just a way to highlight the absurdity of the Republican dream of legislating every second of a person’s pregnancy and stripping us of all bodily autonomy. She says she wants to “bring awareness to the fact that if you’re going to legislate our bodies, then we have every right to propose legislation to regulate yours.”

The testicular bill of rights is obviously not a genuine proposal to answer the oppression of one group with equal oppression of another. It’s a cleverly cheeky publicity stunt looking to make a point because reproductive rights are under attack and the anti-choice right shows no sign of letting up. Kendrick found a way to keep this conversation going, and it’s proven damn effective.

Sure wish I had gotten all this media attention BEFORE HB 481 was passed. It would have been a much better narrative. Oh well. 🙄