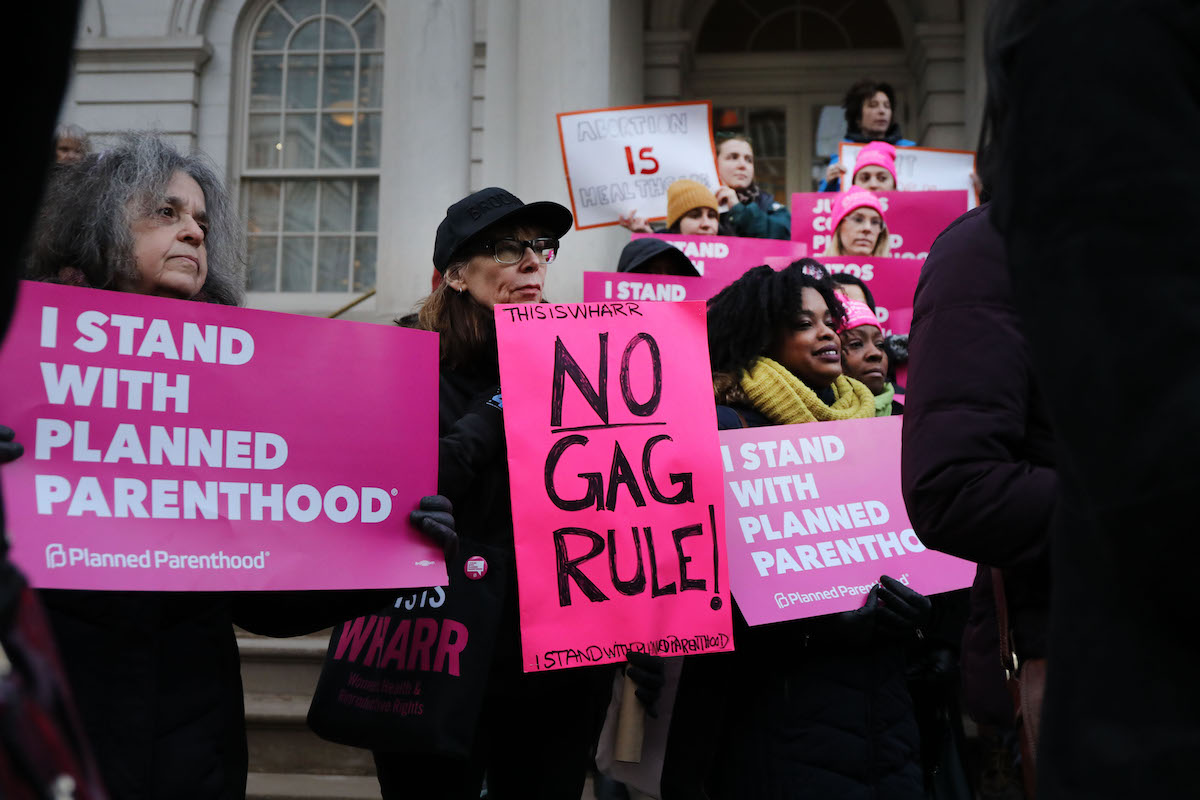 Last week, California filed a lawsuit challenging the Donald Trump’s recently announced domestic “gag rule.” The policy would withhold federal funds from any clinic that provides abortion services or even refers patients to get abortions elsewhere.

Title X was set up under Richard Nixon in 1970 to provide health care services to low-income and uninsured patients. There are recipients of this funding in every region of the country, serving approximately 4 million patients. Title X makes up a huge amount of funding for the providers who serve these groups—about 20%.

Title X funding goes to provide all sorts of family planning and preventative care, from contraception and STD testing to breast cancer screenings. That money does not, however, fund abortions. That’s right, absolutely no federal money goes to abortion services already, but it does go to all those other essential health services. (Not that abortion isn’t an essential health service—it absolutely is, despite what the anti-choice voices choose to believe.)

So when people talk about “defunding Planned Parenthood,” what that actually means is denying Medicaid reimbursements for pap smears, cancer screenings, and the like. Planned Parenthood receives about $20 million a year in federal funding and serves about 1 million people annually, and abortions only make up about 3% of the services they provide.

And again, it’s already law that none of that Title X funding goes to abortions.

The TL;DR of all that: Policies like the domestic gag rule have nothing to do with not wanting to spend taxpayers’ money on abortions (because they already don’t) and everything to do with finding a workaround to deny people access to their Constitutionally-protected right to an abortion.

There’s no line item in a budget that goes to Planned Parenthood — simply reimbursement for care rendered, like other health providers. pic.twitter.com/SaTIpE9PUh

The Republican anti-choice quest to kill our right to abortion is nothing new, and they keep creating (or trying to create) new loopholes to get around that pesky Constitution. This new policy, filed by the Office of the Assistant Secretary for Health, insists it “does not prevent a woman from seeking and obtaining an abortion.” It just creates so many unreasonable obstacles that it essentially makes it impossible for one to do so.

This can be an especially difficult hurdle for patients in states where they already have to travel long distances to even reach a clinic in the first place, and many of those states already have 72-hour in-person waiting periods for abortion—other hurdles put in place by existing anti-choice laws.

It’s also not clear, but seeing as non-Title X-funded facilities are prohibited from referring patients to receive abortion services or including that option in their counseling—even, presumably, if they’re just around back of the same building—that seems like a Catch-22 designed to keep patients from being able to access abortions altogether.

Making all of this even more sinister is that much of this federal funding is expected to be redirected away from women’s health providers and into faith-based groups, possibly even into anti-abortion “crisis centers,” which run on dangerous misinformation.

These lawsuits are aiming to block the new rule before it takes effect, 60 days after its filing this past Monday.