This isn't DashCon, guys. People could have died. 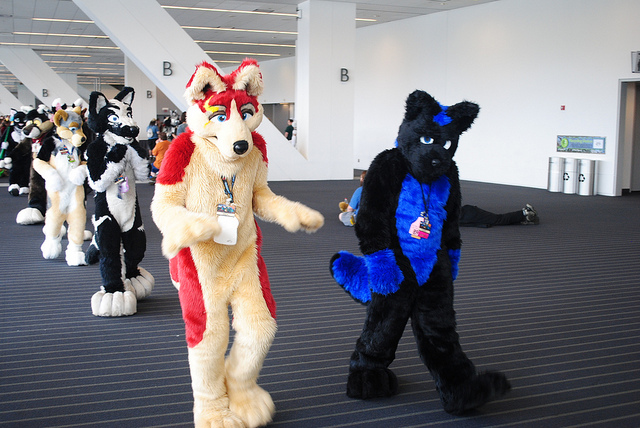 So here’s the rundown, for those of you who have absolutely no idea what we’re talking about and clicked on this article because the words “terrorist attack” get your haunches up: furries, if you’ve never been on the Internet before, are people interested in cartoonish animals with human-like features, who often dress up in mascot-style costumes for fun. Due to the sheer volume of furry erotica that can be found online, they also have a reputation for being sexually interested in these anthropomorphic creatures, which makes them the butt of a lot of jokes. In fact, they’re generally considered to be at the very bottom of the “geek hierarchy,” which is a real and fairly well-known flowchart that actually exists. As a side note, I’m not sure where writing a geek hierarchy flowchart puts you on that flowchart. Not in particularly good standing, if you ask me.

This past weekend the fifteenth-annual Midwest FurFest (which is the second most popular furry-based convention in the country) began on December 5th at the Hyatt Regency O’Hare Hotel in Rosemont, Illinois. It was cut abruptly short at around 12:40 AM on Sunday morning, however, when an “intentional gas incident” hospitalized nineteen people who’d been complaining of nausea and dizziness. After the building—which, by the way, has over a thousand rooms—was evacuated of all attendees and staff, hazardous materials technicians arrived on the scene and discovered what appeared to be powdered chlorine in the ninth floor stairwell, which they determined to be the cause of the noxious fumes.

Luckily there were no serious injuries, and MidWest FurFest was able to return to normal operations for the rest of the day. But make no mistake about it: this was a terrorist attack. Chlorine gas isn’t the sort of thing you use in a stinkbomb prank. It’s a toxic, corrosive irritant that can affect the eyes, nose, throat and lungs; in higher concentrations and under prolonged exposure, it can even cause asphyxiation and death. The German army deployed cylinders of the stuff against enemy forces during World War One, and it was often found at the scene of suicide car bombings linked to Al Qada in Iraq circa 2006-2007. And somebody used it with the intent of causing harm to thousands of people at a geeky convention.

Even worse? What should be an incredibly sobering and distressing bit of news for the entire geek community  at large, is, due to its direct association with furries, now also becoming the butt of jokes. Case in point, this now-trending clip from yesterday’s episode of The Morning Joe (MSNBC’s bastion of journalistic integrity) in which Mika Brzezinski leaves the set in a fit of laughter after one of her colleagues has to explain the hobby to her:

Listen, we’re all adults here—or at least, we’re supposed to be acting like adults. Forget about the fact that “furries” is such a hot Internet buzzword for just a second. Forget about how their relatively harmless kink might squick you the heck out. Can we at least agree that no one deserves to be gassed while at a convention, and that maybe now is not the time for jokes to the contrary? After all, even if you’d prefer to conveniently forget that furries are human beings who shouldn’t be subjected to physical harm for a weird thing they like, what happens the next time someone with access to a toxic agent of chemical warfare thinks a congregated group of people “deserve” it? Heck, what happens when it’s somebody who hates one of your hobbies?

There’s already so many terrible things to worry about when you’re attending a con: sexual harassment from other attendees, for example, or whether or not the artist you admire thinks you have a right to be there in the first place. Are any of us really okay with adding “might get gassed at your hotel in the middle of the night” to that list of concerns?

(via Mediaite, image via Douglas Muth)