I left the industry for twenty years and now I'm irrelevant! Grr, blame the women! 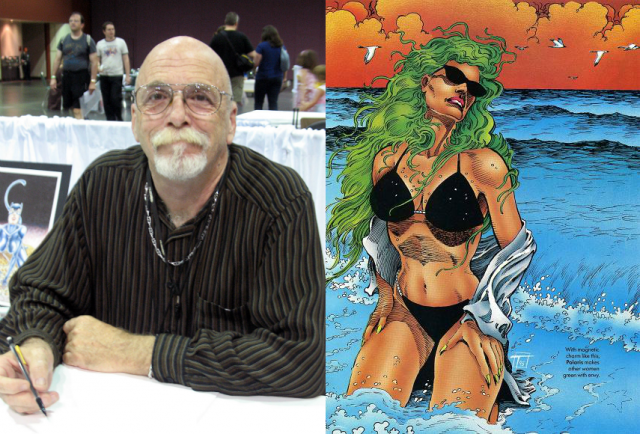 First we had Tony Harris. Then we had Denise Dorman. Now, the latest industry voice to come out with a rant against cosplayers is artist Pat Broderick, who just can’t handle this “highest expression of narcissism.”

Broderick worked heavily in the ’70s and ’80s on titles like Batman: Year Three, Captain Atom, Doom 2099, and Micronauts, but left the industry in the mid-’90s when the bottom dropped out (and, according to this interview, because of some negative experiences with both DC and Marvel). Recently returning to the business, it’s clear Broderick doesn’t like what he sees.

In the comments section of the original post, Broderick goes on to say that (all sic) “cosplay are just selfies in costume, and doing multiple selfies is about the highest expression of narcissium,,,,,” and doesn’t undertstand “why the hell anyone pay for an signiture on a photo with a cosplay character…..” Broderick also cites the same reasoning as Dorman did behind her rant; that though con attendance is up, “this has not made its way to both [dealers and artists].” Broderick suggests that cons “completly seperate the media and cospaly guest into their own seperate shows…”

Other industry pros were quick to jump on the anti-cosplay bandwagon. Raymond Lui, owner of the NY-based Muteki Sales (an anime and tokusatsu dealer who, by the way, had their self-proclaimed “best showing” at NYCC in 2012, with tons of cosplayers in attendance) shared a story about a cosplayer in his booth who said they wanted to cosplay Doctor Strange because of excitement over the upcoming film, but didn’t know much about the actual comic book character. Lui kicked the attendee out of his booth. Artist and writer Mike Wolfer (who most recently Kickstarted “a 96-page, black and white, erotic horror graphic novel”) said that he will “ignore con invites that proclaim, ‘HUGE COSPLAY CONTEST (oh, yeah… and Stan Lee).'”

Writer Mark Ellis (who has written many books in the Outlanders series under the name James Axler) added that “[t]urning over these events to people with Narcissistic Personality Disorder and Zombie #4 from a 10 second scene in an episode of The Walking Dead does nothing to support comics,” and also that he hates:

overweight women in Power Girl and Slave Girl Leia costumes posing, posturing and demanding $20 to take a photo of them. A guy I know just said, “You’re standing around in public looking like a fool…shove your $20” and took pictures anyway.

I feel like we’ve tread over this ground so many times that it’s exhausting to continually have to make the same arguments in defense of cosplay, but I can’t stand whiny, bigoted rants like this, so I’m going to do it anyways. Here’s some advice I have for Broderick, and for anyone else who might decide to write some anti-cosplay nonsense in the near future:

1. At NYCC this year, Alice X. Zhang, Karen Hallion, Babs Tarr, and Katie Cook had huge, inventory-decimating lines at their booths every single time I visited Artist Alley. Perhaps creators like Broderick need to find a way to stay relevant, and to appeal to the current generation of comic book fans and convention goers. I hear Sailor Moon fanart sells particularly well.

2. Making elaborate costumes for cosplay, like official con cosplay guests do, takes an enormous amount of time, talent, and effort. I’m not sure who determined that there would be an artistic hierarchy, and that creating art on paper would trump creating three-dimensional wearable art, but I have a feeling Broderick would find himself out of luck if asked to sit down at a sewing machine and re-create any professional cosplayer’s work.

3. Okay, I lied; I do have one idea about this artistic hierarchy. Cosplay is an industry largely dominated by women; it opens up the world of comics—a world which has overwhelmingly felt exclusionary to girls and women—in a whole new way. It allows not only a small subset of women to make money off of their love of comics (something self-proclaimed comic fan Broderick has been doing for decades), but it also allows a large number of female comic book fans who might otherwise feel shut out of the industry to proudly proclaim their love for certain characters or comics. Strange that so many people have taken issue with something that often involves women taking control of their own image, bodies, and sexuality, and commodifying it without male permission or control. So strange.

4. It is not Broderick’s job, nor is it Lui’s, nor is it anyone’s job to be a gatekeeper and decide who knows enough about comics to be a “true” fan. I’ve said this before, but just because you liked something first doesn’t mean you own the rights to liking it. Dressing up as Captain Marvel doesn’t mean I have to know everything about every Marvel comic ever—I could just like the current run, or I could just dig the outfit. Women don’t have to earn the right to dress up in your presence with an encyclopedic knowledge of comic books. Lui could have used that opportunity in his booth to sell that cosplayer a Doctor Strange comic, or to recommend a book, or to share his love—but instead, he decided to be cruel. This doesn’t help anyone.

5. Cool, stop going to the biggest conventions in the world, then. I bet that’ll really help your bottom line. Good luck with that.

um Pat I’d say the “highest expression of narcissism” is whining publicly that you don’t get enough attention http://t.co/DSvjeD6Zwz

(via The Telegraph, images via Marvel Wiki, Marvel Swimsuit Special 1995)