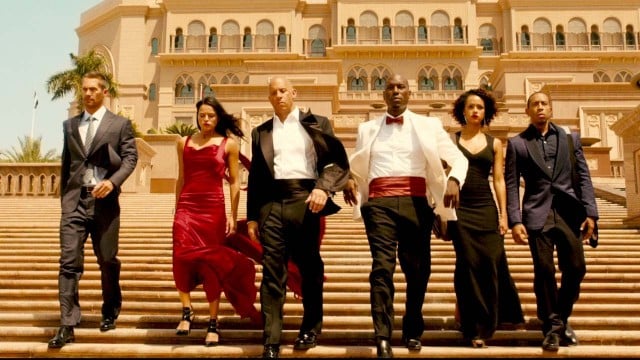 Furious 7 just had the ninth-biggest opening weekend of all time (and the biggest April opening weekend ever!), pulling in $384 million at the global box office and $143.6 million domestically. And although some of the film’s success can likely be attributed to fans turning out to see the late Paul Walker on the big screen in his final movie, opening weekend statistics also show that the Fast franchises’ awesome representation is paying off big time.

According to Universal, 75 percent of the audience in North America was non-Caucasian, generally in line with previous installments. Hispanics, the most frequent moviegoers in the U.S., made up the majority of ticket buyers (37 percent), followed by Caucasians (25 percent), African-Americans (24 percent), Asians (10 percent) and other (4 percent).

The LA Times reports that men made up only 51% of ticket buyers.

The fourteen-year-old franchise’s appeal was discussed at length in the lead-up to Furious 7′s release, with star Michelle Rodriguez saying in a recent interview that the diverse cast is a huge draw:

People in this country – or in Spain, in Africa, in Asia – they can buy a ticket and see somebody who looks like them, and someone who isn’t necessarily a stereotype but an individual, a character who’s kind of blue-collar but also in this heroic position. It’s still pretty rare to have characters like that you can identify with.

The importance of diversity of the ensemble cast in the Fast and Furious franchise has been an integral part of the success of the brand. There is literally someone within the cast that is relatable on some level to nearly every moviegoer around the world, and this has paid big dividends at the box office and also in terms of how casting decisions will be made in the future for these types of large-scale action epics.

Universal president of domestic distribution Nicholas Carpou also confirmed to THR, “Someone that I admire quite a lot recently said this is a franchise that really looks like America, and there are characters that everyone can relate to. I think that’s a big plus.”

Hopefully Dergarabedian is right and Furious‘ success will influence future franchises by reminding Hollywood that, as a report from the Center for African American Studies also revealed earlier this year, diversity sells. Representation is ride or die.