Who knew nostalgia could be edible? 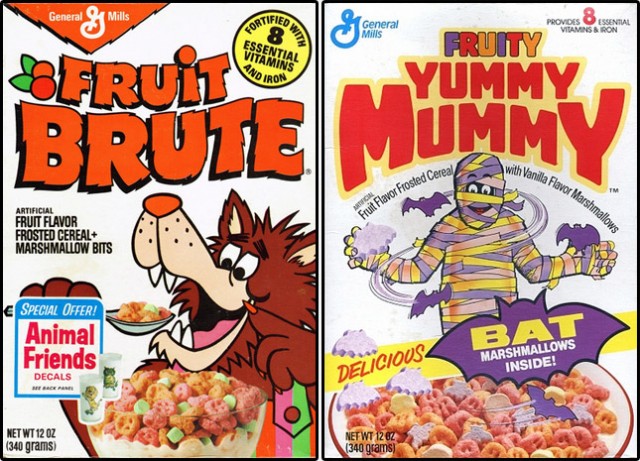 All five of General Mills’ classic monster cereals are returning! Resurrections of Count Chocula, Boo Berry, and Frankenberry have become a regular Halloween thing, this is the first time in decades that Fruit Brute and Yummy Mummy will be back on store shelves for children of all ages to enjoy.

For those too young to recall or just need their memory jogged a bit, Fruit Brute was introduced in 1975 and had lime marshmallows (Tarantino fans might also recognize it from cameo appearances in Pulp Fiction and Resevoir Dogs), while Yummy Mummy emerged from his coffin in 1987 and was known for his giant vanilla “Monster-mallows”. Neither could match the popularity of the holy trinity of Chocula, Franken, and Boo, so the Fruit Brute and Yummy Mummy were discontinued in 1984 and 1993, respectively.

At one point they both got relegated to being marshmallow heads in Count Chocula, which I would assume is very demeaning in the cereal monster world. But this Halloween both the Brute and the Mummy will be available in these new horror movie-style boxes. To help make a distinction between the two considering the actual cereal parts of both were initially “fruit” flavored, Brute’s will now be cherry flavored and Mummy’s is now orange cream flavored.

Target will be selling them in their original packaging, should you want to really go retro. Now who’s hungry for some Nintendo cereal?