It’s said that 4chan, for all its horrors, is the Internet’s secret creative nerve center. 4chanarchive recently posted an epic thread from earlier this month that would seem to back that up: “Variations of Bel-Aire,” a machine-gun fire of parodies of the Fresh Prince of Bel-Air theme song. You can see the full thread here. (Warning: link NSFW.)

4chan being 4chan, a few are offensive, a few are less than inspired, and almost all are probably copypasta.  (It should be noted that when the Balloon Boy drama unfolded last October, there was a Fresh Prince parody within hours.) But a lot are great — and geeky. Taken together, they show the creative power harnessed by anonymous thousands with beastly levels of pop culture knowledge.

After the jump, seven of the geekiest Fresh Prince theme parodies, including Lord of the Rings, Pokémon, and Star Trek: 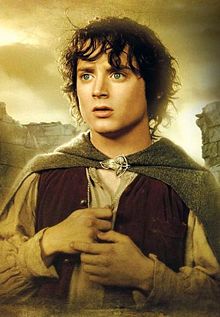 Now, this is a story all about how
My life got flipped-turned upside down
And I’d like to take a minute, just sit right in the dirt,
I’ll tell you how I became the savior of a place called Middle-Earth

In Hobbiton, with uncle Bilbo, born and raised
Between the trees was where I spent most of my days
Smokin’ some pipeweed, relaxin’ all sweet,
And occasionally a party, with the town elite,

When the birthday party of Bilbo came around,
And Bilbo decided to move out of town
I inherited one little ring and Gandalf got scared
And said ‘You’re going’ to Mordor and you’re destroyin’ it there”

I whistled for companions and when they came near
There was an Elf, a Dwarf, 3 hobbits and two humans there
If anything I can say this Fellowship could’ve been more
But I thought ‘Now forget it’ – ‘Yo homes to Mordor’

We fought into some wars, about 7 or 8
And I yelled to others ‘Yo homes smell ya later’
With Sam at Mount Doom, it was finally time
To save Middle-Earth and end this terrible rhyme.

Well this is a story all about how,
My kingdom got flip-turned upside down.
I’d like to take a minute please check Encarta,
I’ll tell you how I died while defending Sparta. 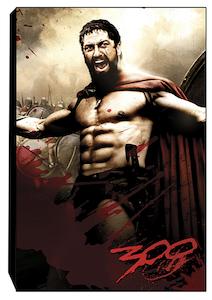 In Sparta of Greece born and raised,
Ruling warriors was how I spent most of my days.
Chillin out, phalanxin, training all cool,
And killing giant wolves instead of school.

When a couple of Persians, who were up to no good,
Started bribin Senators in my neighborhood.
I killed one little messenger and they all got scared and said,
“We’re not givin you soldiers, take your royal guard there.”

I whistled for a legion and when it came near,
There was only a couple Greeks and some Thespians here,
If anything I could say that doom awaits,
But I thought, “Nah, forget it, yo Spartans to the hot gates.”

We fought Persian waves, about 7 or 8,
And I heard from my allies, “Its an honor, Leonidas”,
Looked at Xerxes, there was no way outta this,
“We’ll see your troops soon, at Salamis.” 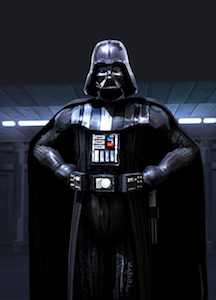 Now this a story all about how,
My life got flipped turned upside down,
And you should take a minute just listen to this,
About how I became apprentice to the Dark Lord of Sith.

In West Tatooine I was born and raised,
On junkjard is where I spent most of my days,
Slavin out racin, inventin all cool,
I was drivin my podracer always after school.

When a couple of Jedi who where up some good,
Started making trouble in my neighborhood.
I won one little race and I got flamboyant
And I was movin’ with Obi and Quigon to Corouscant.

I was looking for a Queen and when I to Naboo,
I fell in love with Padme and her real tight vagoo.
If anything I could say that I was afraid,
But I thought “Nah forget it, it’s not yet too late.”

I pulled up to the chancellor, telling him of this,
When I realized he was the Lord of the Sith.
I embraced the Dark Side, I was finally Vader,
I could sit on my throne and kill Obi Wan later.

Now this is the story all ’bout how
My life got flipped, turned upside down.
Let me tell you the story how I started my quest
To be the trainer that’s best of the best. 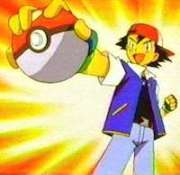 In cozy Pallet Town, born and raised.
In my bedroom is how I spent most of my day,
Chillin’ out, maxin’, relaxing all cool
And playing some Nintendo right after school.

My mom said Prof. Oak was looking for me,
So outside I went, there was no one to see.
I stepped in some grass, and the Prof. came and freaked
And said “There’s some Pokemon in my lab I’d like you to meet.”

I picked Bulbasaur, but just as I feared,
My rival picked Charmander with a big sneer.
If anything I could say that this fight wasn’t fair
But I shrugged and said “Yo Bulbs, do we care?”

We pulled through in the end, which my rival did hate
And he yelled to the Prof. “Yo gramps, smell ya later!”
I looked back at the town, as I started the quest
To became a great trainer, the best of the best. 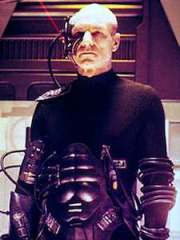 Now, this is a story all about how
My life got flipped-turned upside down
And I’d like to take a minute, just beam aboard,
I’ll tell you how I got turned into Locutus of Borg

In the 24th century born and raised
On the Enterprise was where I spent most of my days
Seekin’ out new life and civilizations
And all givin some Klingons a phaser cremation
When a couple of Cubes who were up to no good
Startin’ makin’ trouble in my neighborhood
I got in one lil fight and Command got scared
They said ‘You’re movin’ with the fleet, now get your ass out of there ‘

I put the cube onscreen and when it came near
The the shield arrays were down and it was losing its rear
If anything I can say this cube is rare
But I thought ‘Now forget it’ – ‘Beam us down over there!’

Some Borg drones grabbed me, about 7 or 8
And I yelled to Tom Riker ‘Yo homes smell ya later’
I looked at my face plate, I was human no more
So now sit on my throne as Locutus of Borg.

Now this is a story all about how
My barbarian existence got turned upside down
I’ll tell you how I became the Aquilonian king
To thread the thrones of men with my sandaled feet. 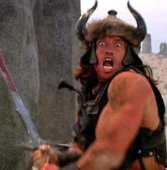 In eastern Cimmeria born and raised
In the forests where I spent most of my days
Hunting, fighting, relaxing all cool
Skinning some wolves with my trusty tools

When a couple of Stygians were up to no good
And a band of Picts showed in the neighbourhood
I got in one little fight and Crom got pissed with me
He said : “YOU’LL BECOME THE AQUILONIAN KING”

I yelled for a horse and when it came near
I saw it has fingers for hooves and could not be seen in the mirror
If anything I could say that the sorcery was black
But I thought now, forget it, let’s kill some Turanian rats.

I arrived at the palace, the guards were easy to deck
And ripped king Numedides’ head from his scrawny neck
Looked at my kingdom, tomorrow the bards will sing
The story how I took my throne as the Aquilonian king.

This is a tale explaining the manner in which My way of life was rotated along a Y axis until it reached a position roughly 180 degrees from that which it started If I could have 60 seconds of your time, simply place your posterior in the selected location And I will relate to you the details of how I was made the male monarch of the district of the City of Los Angeles, California commonly referred to as Bel-Air (coordinates 34.08333 -118.44778). 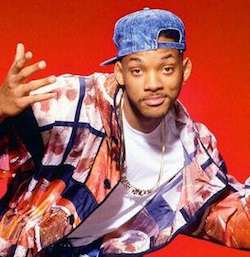 In the western region of the City of Brotherly Love, known as Philadelphia my mother expelled me from her womb and indeed that is also where I spent my childhood in my mother’s care The majority of my time was spent in a recreational area containing such diversions as a jungle gym, swing set, sand box, etc. I was typically at the height of leisure while frequently at a temperature slightly below what might be considered standard room temperature Outside of my educational institution I was engaging in a game of basketball with some of my friends When a couple of gentlemen who seemed to be of the disposition to cause a great deal of mischief Began causing a great deal of chaos and disharmony in the area in which I lived I was involved in one rather small bout of fisticuffs after which my mother became concerned for my general safety and well-being And she informed me that I would be moving in with her sister and her sister’s husband in the previously mentioned community of Bel-Air.
I implored my mother to relent approximately 24-48 hours ago Yet she gathered my belongings in a somewhat flat, rectangular shaped piece of luggage and expelled me from her presence She placed her lips upon my cheek in an affectionate manner and handed me a pre-purchased pass for public transportation I placed the headphones for my personal music system into my ears and verbalized the idea that I may as well impact this situation with my foot.
Traveling in the highest available level of comfort, this is indeed an unfortunate situation (although I make this statement with some irony) Consuming the juices obtained by the squeezing of the fruit of a Citrus sinensis from a piece of glass stemware commonly reserved for the sipping of sparkling wine originating from the Champagne region of France I pause to wonder if this is indeed how the residents of the admittedly upper-class neighborhood of Bel-Air commonly live Indeed I find this situation may be rather to my enjoyment.
I puckered my lips and exhaled forcefully to produce a shrill note in order to gain the attention of a taxicab driver and as the driver approached I observed his California vanity plate which in place of the traditional jumble of alpha-numeric characters, used only the letters F, R, E, S, and H, spelling out the word “fresh” and from his rearview mirror dangled a pair of oversized, fur-covered cubes decorated to look like the six-sided dice commonly used in gambling and board games In such a situation I could have made a statement about the unusualness of this particular taxicab to the point of it being nearly unique Instead I cogitatively decided against it and instead informed the driver that he should deliver me to what was to become my new home in the community of Bel-Air.
We pulled up to a large domicile sometime between the hours of 7 and 8 o’clock And in a loud tone of voice I informed the cab driver that at some undetermined point in the future I would again detect his odor through my sense of olfaction I gazed about the region of land that I was destined to rule, reflecting on my arrival Where I would claim my rightful place upon the throne, from which I would govern the community of Bel-Air as monarch.