Saw is probably not a good film to show 11-year-olds, and not just because of the predictable plot and hackneyed direction. 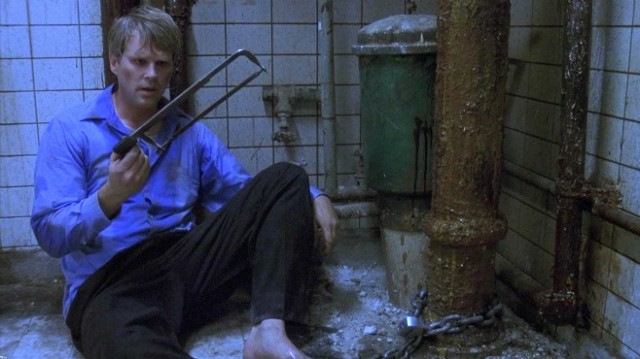 It’s that time of year again when kids are starting summer vacation and teachers just couldn’t give a damn. Yesterday, we brought you the story of a fourth-grade teacher from Wisconsin who got falling down hammered while chaperoning a class field trip. Today, Europe is getting in on the action as a sixth-grade teacher in France has been suspended for putting on a viewing of Saw for a roomful of 11-year-olds. If he really wanted to watch a Cary Elwes movie that badly, it occurs to us that The Princess Bride might have saved him a lot of trouble. Also, it’s a good film, unlike Saw.

I for one can attest to the power of viewing horror movies at too young an age to really process them. My Dad sat me and my kid brother down for a viewing of Evil Dead when I was about nine — my brother was all of six — and it pretty thoroughly scarred us both for life. Also, I’m reasonably certain my Mom is still pissed at him for it. But even that is better than the situation Clement has put himself in. I mean, at least it was my Dad. Parents are supposed to scar you for life — it’s what they do. Teachers are supposed to do everything in their power not to scar a kid for life, even if they often will anyway. That’s why they get paid and parents don’t.

Maybe the most unforgivable part of this whole sordid story, though, is that Clement, clearly aware that this would be the first horror movie most of these kids had viewed, chose Saw as an introduction to the genre. To which we can only say a resounding “Really, dude? Really? Saw?” If you are going to introduce kinds to a whole variety of movies, there are plenty of great flicks out there to get them started on! Modern chillers like The Innkeepers or classics like The Exorcist. There are franchises that should be required watching, like the Nightmare on Elm Street and Halloween films. Hell, there are even age appropriate scares for 11-year-olds like the scarier-than-you-remember Little Monsters and the not-as-scary-as-you-remember Poltergeist.

All these movies and more at your fingertips, and you go with Saw as a way to introduce a new generation to horror cinema? Suspension nothing — that fact alone should be grounds for termination. And maybe a stint in some sort of basic cinema re-education camp.