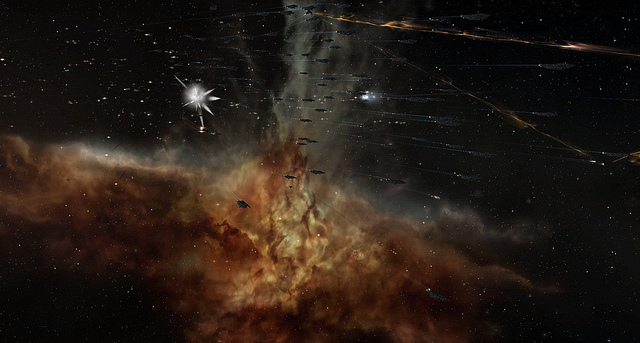 One of the persisting questions in science is, “Are we alone in the Universe?” and we’ve long been searching the skies for potential signals from alien civilizations. Now, scientists are considering a new possibility: We might have already found alien signals and just not realized it yet, because proving it is probably beyond our current capabilities. That’s the basis of a new hypothesis from Harvard scientists about the phenomenon of Fast Radio Bursts.

Those Fast Radio Bursts are fairly accurately named. They’re incredibly short, absurdly intense bursts of of radio waves that originate from locations beyond the boundaries of the Milky Way. They were first discovered in 2007 (in data from 2001), and just this year, scientists pinpointed the origin, in a faraway galaxy, of one of the bursts for the first time. They’re very hard to detect, and much like that oddly dimming star that we’re all daydreaming is caused by alien activity, we don’t currently have an explanation for them from the natural world—though some possible explanations have been put forth, we don’t know of any astronomical phenomenon that creates such a thing for sure.

So how would aliens do it? The possibility, put forth by Harvard Scientists Avi Loeb and Manasvi Lingam, would be a large-scale version of a technology we’re just beginning to explore here on Earth: sailing through the cosmos using separate, targeted beams for propulsion. Using a massive, space-based structure beyond our current technological know-how—but seemingly physically possible—alien civilizations could generate enough power to fire FRBs at the “sail” of a giant spaceship, pushing it through space and allowing it to reach interstellar travel speeds due to continuous acceleration. That’s basically how Stephen Hawking and Yuri Milner’s plan to send probes to explore Alpha Centauri, the closest star system to our own, works, if we can get the technology working on a scale capable of sending tiny “nanocraft” up to 20% of the speed of light.

The Harvard team says FRBs would be doing that on a much larger scale, with ships weighing up to one million tons, or twenty times as much as our biggest cruise ships. That would take continuous pressure from the beam for acceleration, but Loeb and Lingam’s idea suggests that it would appear as a brief burst on Earth because “the sail and its host planet, star and galaxy are all moving relative to us. As a result, the beam sweeps across the sky and only points in our direction for a moment.” Lingam further explained that ships riding FSBs through space could be, “big enough to carry living passengers across interstellar or even intergalactic distances.”

While it’s an exciting prospect that not only could we have we detected signals created by alien civilizations, but that we simultaneously discovered that they’ve developed technology capable of fast space travel, Loeb was sure to point out that this is all just a possible explanation, saying, “Science isn’t a matter of belief, it’s a matter of evidence. Deciding what’s likely ahead of time limits the possibilities. It’s worth putting ideas out there and letting the data be the judge.” Basically, unless there’s a reason it’s definitely not aliens, ruling out the explanation just because it sounds like wishful thinking would be a mistake—a line of thinking we’re more than happy to go along with.