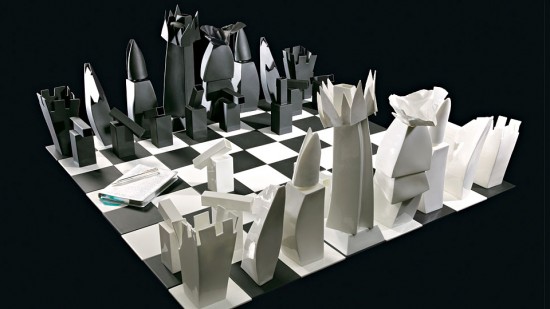 Frank Gehry is probably better known for his architectural works, which include the Guggenheim in Spain and the rippling 8 Spruce Street tower in lower Manhattan. He’s less known for his chess playing, but it apparently interested him enough to create this set for Tiffany and Co. for the bargain-basement price of $25,000.00.

Though the pieces are typical Gehry design, with their off-kilter angles, there’s something more at work here. According to Gizmodo, Gehry took the role of the pieces to heart when designing them. The knights lean to one side, belying their L-shaped movements, and the angular king contrasts with the rippling, curved queen. The pawns, meanwhile, have…cannons?

Alright maybe the analogy breaks down at that point, but it’s a really cool chess set regardless.