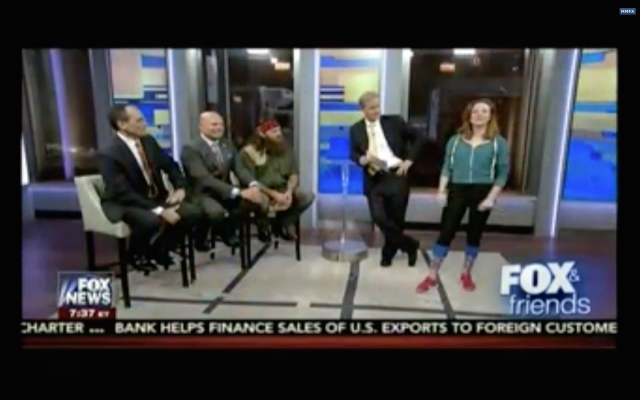 On a recent segment of Fox and Friends, a “panel of fathers” was invited onto the show to discuss whether it was appropriate to wear leggings as pants. In other, related news, a bear was brought on the show to share its opinion on space exploration.

The super-qualified panel consisted of Fox legal analyst Arthur Aidala, Andrew Sansone (husband to Fox’s Julie Banderas), and the one and only Willie Robertson of Duck Dynasty fame. With a panel judging women like that, who needs enemies? Wait, no. That’s not right.

Their opinions ranged from the odd (“Our girls are so young, they have diapers on, so it’s fine.” – Sansone) to the “did you really just…” (“My girls wear the longer shirts to cover up the… you know, the lady parts.” – Robertson) to the “oh my god can you not” (“We basically have a rule in the Aidala household overall… if it’s not worn in the monastery, it’s not worn out on the street.” – Aidala). Host Steve Doocy emphatically agreed with that last one because of course he did.

To Robertson’s credit, he did say he’s totally fine with it. Albeit, as long as their “lady parts” are covered up.

As if the segment needed to be skeezier, they brought out three women who were wearing leggings to, uh… be judged by the panel. Doocy introduced the first woman, saying, “The three guys are looking at Kaitlyn right now…” Yeah. He said that in full seriousness. Especially egregious were the comments to the last woman who came out wearing leggings. Check out the transcript from MediaMatters below.

DOOCY: Thank you, Amanda. Right over there toward Keith. Thank you very much. And our final contestant is Paige. All right.

DOOCY: Paige is wearing purple leggings with a black tank top. It looks like Paige just came from pilates.

PAIGE: No, I did not wake up that early.

AIDALA: See, we all took nitroglycerin pills before she came on the set, just to make sure.

AIDALA: Come on. Step up. Step up. This is your daughter out there, son.

SANSONE: Do I have a lifeline?  No?

DOOCY: Yes, call Arthur. Arthur, what do you think?

So basically this entire segment is a bunch of dudes judging women based on what they’re wearing, then they go on to ogle and talk about a few of them right to their faces. Even for Fox News, this entire segment is freakin’ dense. I know, I know, “it’s Fox News, what do you expect,” but like, how did nobody stop to think about how ridiculous this might look?

It boggles the mind.