What Would It Take For Fox News to Finally Fire Tucker Carlson?

What Would It Take For Fox News to Finally Fire Tucker Carlson? 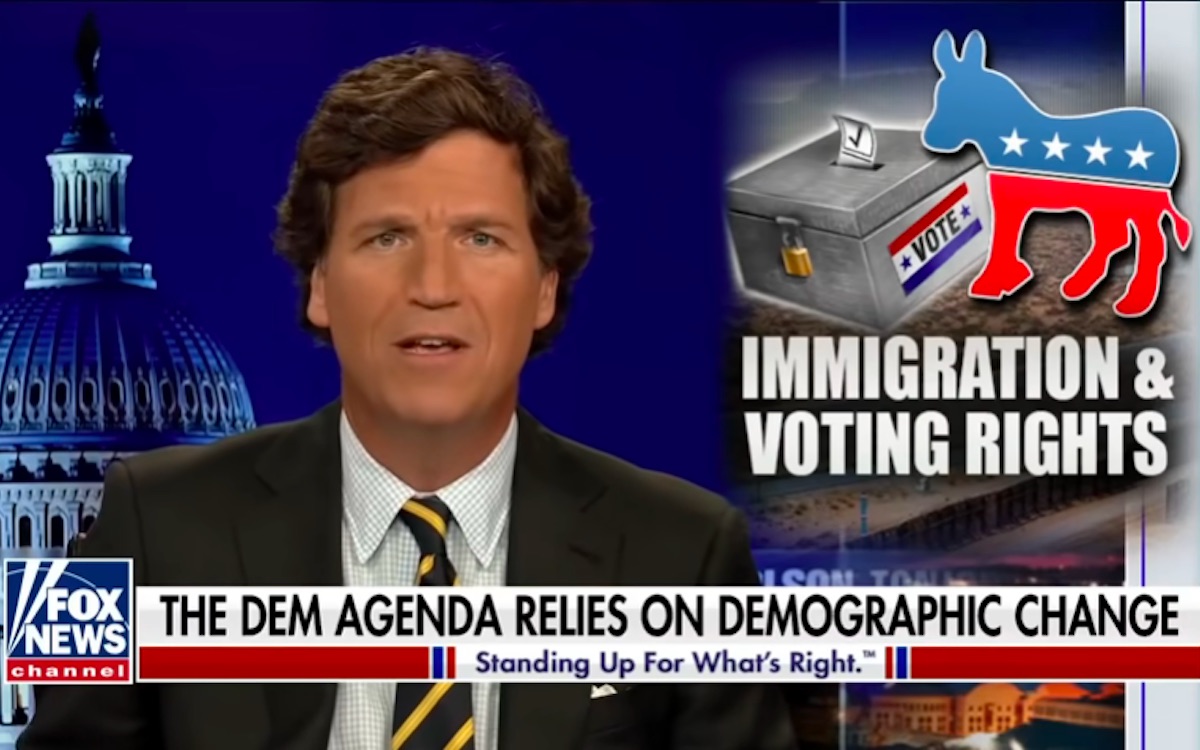 Tucker Carlson should never have been put on television in the first place, and over the years he’s repeatedly made that clear. His show is built on a foundation of white nationalist talking points, and he lies so much he literally had to argue in court that his viewers don’t expect him to tell the truth. He should have been fired ages ago, but his ratings are also out of control, so Fox News has never been willing to or probably even interested in firing him. But every time he commits some obviously fireable offense and Fox doesn’t take action, it only makes him bolder.

The Anti-Defamation League (among many others) called on Fox News to fire Carlson last week after he used his show to push the incredibly racist “great replacement” theory—a well-worn white supremacist talking point that posits white people are being “replaced” with immigrants and POC through a deliberate, coordinated effort by Democrats to “replace the current electorate” with “more obedient voters from the Third World.”

Lachlan Murdoch, Fox Corporation’s chief executive, told the ADL that Carlson would not be fired and defended Tucker by saying his comments weren’t about race, but were just a “voting rights question.”

On Monday night, Carlson then doubled down on his racist comments, saying his statement “was true and therefore worth saying” and that “America badly needs a national conversation about it.”

Tucker Carlson responds to outrage over his endorsement of “white replacement theory” by doubling down: “It’s true” pic.twitter.com/zH5KYA2I9I

this might as well be part of the intro seminar at a neo-nazi rally pic.twitter.com/sdsHuRB7lw

More people are also calling for Carlson to be deplatformed not just from his home at Fox News but from Facebook. The site supposedly committed to banning COVID-19 misinformation from being shared, and yet a clip from his show where he suggests the vaccines are ineffective was the site’s top post earlier this week.

In December, @facebook banned claims about #covid19 vaccines “that have been debunked by public health experts.” And yet ⬇️. Especially troubling given Republican men are currently most likely to say they’re not interested in being vaccinated. https://t.co/NHWwn8vQ31

“If vaccines work, why are vaccinated people still banned from living normal lives?” Carlson said on his show. “So maybe it doesn’t work, and they’re simply not telling you that. Well, you hate to think that, especially if you’ve gotten two shots, but what’s the other potential explanation? We can’t think of one.”

Carlson is beloved by white supremacists, and he’s spreading dangerous COVID-19 misinformation. He is a public menace and he is doing real harm on a massive scale, which I suppose is why Fox News loves him.