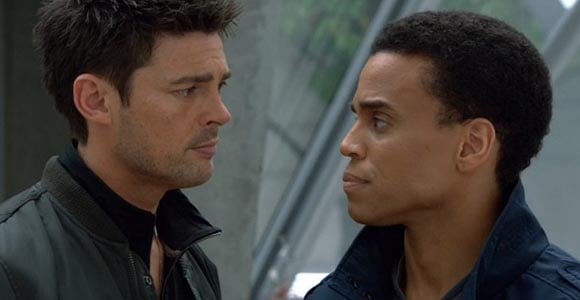 We could have had it all, but no, Fox strikes again.

[The show] got off to a sluggish start in November but held enough ground to at least earn renewal consideration, often finishing on par with its Monday companion (the already-renewed drama The Following). In fact, the March season (and series) finale of Almost Human logged a 1.5 rating in 18-49, matching the Live+Same Day rating for last night’s finale of The Following. (The Following is a bigger DVR draw). Almost Human‘s chances started to slip once Fox’s drama pilots started to come in. All three of them — Gotham, The Red Band Society and Empire – are considered strong contenders for a series pickup.

I swear to god, Gotham, you better be worth it.

I’m personally really bummed about this news. Besides the obvious Firefly cancellation comparisons (Fox screwed around with the Almost Human episode order too), it was a really enjoyable show with a fairly believable future scenario. Billed as a drama, it had a lot of comedy as well and the chemistry between Urban and Ealy was irresistible. Not to mention the show had a diverse cast with an African-American in a lead role, a Detective with an amputated leg, and a female Captain at the helm.

It had its rough spots, like many new shows, but I was hoping they’d be perfected come Season 2. Damn it! Now we’ll never find out what’s over the wall. I suppose I’ll just have to assume White Walkers.

[Edit: There’s a petition to try and save the show, if you’re into that sort of thing.)