If you were an element, you'd be oganesson (cause you're Og). 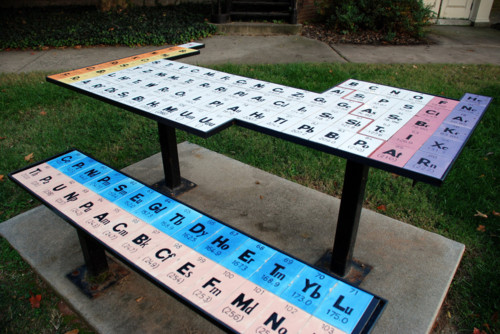 The International Union of Pure and Applied Chemistry recognized the discovery of elements 113, 115, 117, and 118 on the seventh row of the periodic table not too long ago, but now they have real names! The four are highly unstable superheavy metals made by “bombarding metal targets with beams of ions.” Previously referred to by their numbers or placeholder names (ununtrium, ununpentium, ununseptium, and ununoctium respectively), the proposed names went through a review period and are now official.

There are lots of guidelines and rules for naming elements which means, in Science News’ words, “no Element McElementface.” (New animal species though? Completely different ballgame.)

The scientists at RIKEN in Wako, Japan named element 113 “nihonium,” which comes from “Nihon,” a name for Japan with the abbreviation Nh. 115 received the name “moscovium” for Moscow, shortened to Mc, as it houses the Joint Institute for Nuclear Research in Dubna. Researchers at Lawrence Livermore National Laboratory in California and Oak Ridge National Laboratory in Tennessee collaborated with the Russian institute, and the name for 117 is “tennessine,” with the symbol Ts. Finally, element 118 received the name “oganesson” after Russian physicist Yuri Oganessian. Its abbreviation, reminiscent of the man himself, is Og.