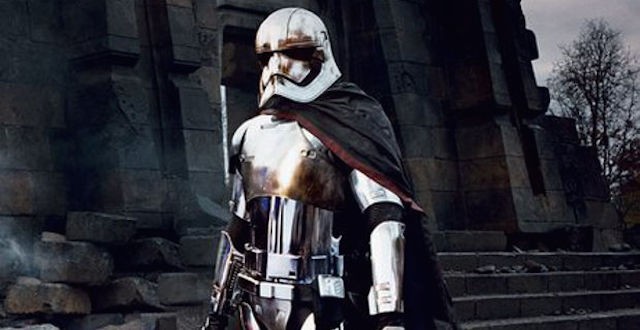 When movie productions of this magnitude are as secretive as The Force Awakens has been, story and character details start coming from some strange places. With the recent Force Friday event driving a merchandising boom for the movie, the strange place now in question is Halloween costumes for the movie—you know, the one releasing well after Halloween in December, as if that’s going to stop anyone’s costume plans.

Minor spoilers possible ahead, of course.

As for the information itself, the various descriptions collected by Star Wars Episode VII News are nothing Earth-shattering, and it should be noted that Matt Martin of Lucasfilm says the exact copy for the costumes wasn’t directly approved:

@ManaByte They didn’t come past me for approval, I know that much! My guess is the retailer is editorializing a bit.

However, somewhere within the admittedly lengthy descriptions may be bits of truth that were given as direction for the rest of what was written, so we’ll pick those out for you anyway. The big plot details will certainly be saved for the next (final?) trailer, but the costumes bring some interesting confirmations/tidbits about the main cast including Rey, Finn, and Captain Phasma.

Let’s go with the Captain Phasma costume first, because why wouldn’t we?

Her description is, unsurprisingly, the vaguest, but at the very least, it sounds as though she might be a more integral, high-ranking character than her Boba Fett-esque badass-behind-the-armor feel thus far may have suggested:

From behind a suit of silver armor and a reflective, mirrored mask, the captain inspects a unit of Stormtroopers before battle. The Resistance must be brought to its knees, so that the First Order may reign supreme over the galaxy. Villains like Darth Vader and Emperor Palpatine have ruled in the past, but in Star Wars: Episode VII The Force Awakens, the face of the Dark Side has been replaced, and her name is Captain Phasma.

This description falls along the same lines:

After the Battle of Endor, the Empire fell, and the powers it held were scattered throughout the galaxy.This is the tale that is told in Star Wars: Episode VII The Force Awakens, and one of the antagonists that seeks that power for herself is Captain Phasma of the First Order.

Maybe it’s just our excitement to see Gwendoline Christie’s badass, chrome-plated stormtrooper in action or the fact that her armor already sets her apart from the rest of her First Order cronies, but it sounds like she may be pursuing her own goals rather than following orders.

As for Finn, his description seems to point to the fact that he’s not in an “Aren’t you a little short to be a stormtrooper?” situation on Jakku and actually switches sides after starting out as a stormtrooper:

The Galactic Empire has been dead for decades, but evil never really dies. With villains rising to take the Empire’s place, heroes must rise to oppose them. After becoming stranded by himself in the deserts of Jakku, and meeting up with a girl named Rey, a Stormtrooper named Finn has joined the side of the Resistance. He began his adventure as a part of the New Order, but now he’s one of the few people that can stop them.

And speaking of Rey, she apparently lives inside a broken-down AT-AT, which is such an oddly specific detail that we can’t help but wonder if it’s for real:

One of the new characters in Star Wars: Episode VII: The Force Awakens, Rey fights against the First Order with fellow rebels Poe and Finn, along with beloved characters from the classic Star Wars films. She makes her home on the barren desert planet of Jakku, which looks very similar to Tattooine. Living inside a non-functioning Imperial AT-AT, Rey is a scavenger and knows how to fend for herself.

Then there’s this one, which mentions the Starkiller Base—a location confirmed on the official Star Wars website:

After invading the Starkiller Base, one member of the Resistance has split from her group and found herself in a massive room full of First Order soldiers. Completely surrounded by Stormtroopers with blasters and Knights of Ren with lightsabers, she seems to be totally outnumbered. Unfortunately for her enemies, though, they’ve made a big mistake: it’s not about the strength of the weapon, but the strength of the warrior that wields it.

There are also a few bits about Kylo Ren, but most of them simply point to the Knights of Ren looking to take up the mantle of the Dark Side, which is probably the most obvious, vaguest hint of the bunch. So what do you think? Are there really nuggets of truth hiding in these descriptions like so many droids in the desert, or are they more true from a … certain point of view? (AKA lies.)