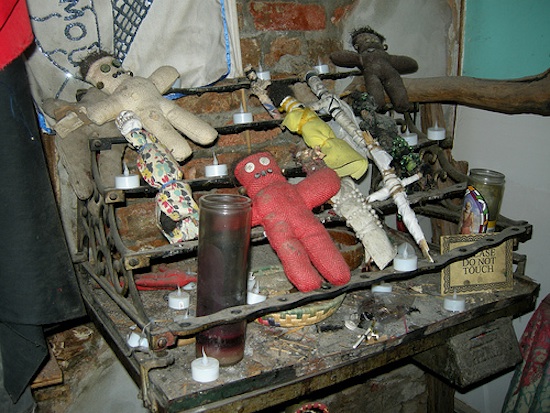 I grew up near Chicago, and thus have an abiding respect for dirty, low-down, mudslinging politics. Every once in a while, though, the rest of the world proves that they can still teach the City of Broad Shoulders a thing or two about really ugly politics This week, it’s Florida, where North Miami mayoral candidate Anna Pierre thinks that one of her opponents — or their supporters — is using voodoo rituals to try and sink her campaign.

In the last three months, the Miami Herald reports, items like chicken feathers, scraps of food, and dolls with pins in them have been left on the doorstep of Pierre’s campaign office, suggesting that someone who wants her out of the race has decided to use that voodoo that they do so…poorly, I guess, considering she’s still in the race. Pierre also complains that more traditional means of derailing her campaign have been taken, with people making anonymous calls and stealing her yard signs, all of which leads us to think that Pierre is probably not in a lot of trouble, as those don’t exactly sound like the tactics of a dark wizard. Voldemort wouldn’t be caught dead stealing a yard sign.

Meanwhile, another mayoral candidate in the same race may have more serious sorcery problems, as someone tagged Dr. Smith Joseph’s medical office with the image of a white fist. Now, exactly why Saruman and his uruk-hai thugs are trying to influence the North Miami mayoral election is unclear, but we’re on record as seriously doubting that any good will come of it.