In the future, there is no excuse for not doing your homework. 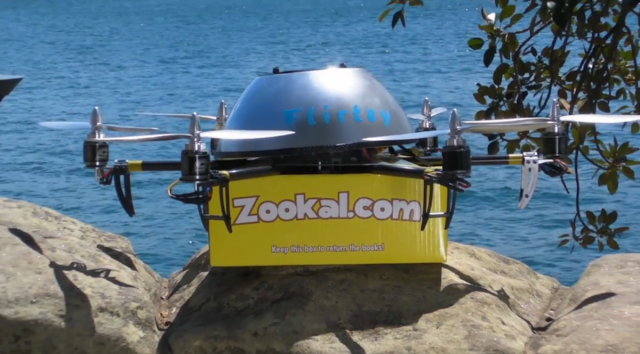 Australian startup Flirtey is pioneering the future of dropping knowledge with unmanned textbook delivery drones. Patience will be a thing of the past when you can get anything you want delivered the very same day by a robot that flies straight to your smartphone’s location.

That’s right, Flirtey wants to load up flying robots with the ability to track your smart phone. If social media platforms are any indication, most people will put convenience ahead of privacy and security and sign up as fast as they can. Who can blame them when Flirtey is promising significantly faster delivery and costs so small that companies won’t charge consumers?

The drone delivery system was originally conceived as a partnership with textbook company Zookal, because standard delivery methods often caused problems for Zookal’s customers. Now students will have no excuses for missing textbooks.

Safety, though a relative concept on the subject of flying robots, is still a major concern for Flirtey’s engineers. The drones are able to avoid collisions with wildlife and obstacles automatically, and they’ve been designed to maintain flight even in the event of a propeller or a battery failure. Still, the US is lagging behind Australia in giving commercial drone flights the go ahead.

Flirtey sees the delay in the United States as a temporary setback that will allow them to perfect their technology while the necessary regulations are put in place. While Australia already has regulations that are meant to foster commercial drone applications, Flirtey is working with the Warren Center for Advanced Engineering at the University of Sydney for test flights and to set industry guidelines to ensure that everything goes smoothly.

The US isn’t slated to approve commercial drone use until 2015 at the earliest, but before long, these flying delivery robots may become a common sight.

(via Engadget, TechCrunch, and The PR Group)