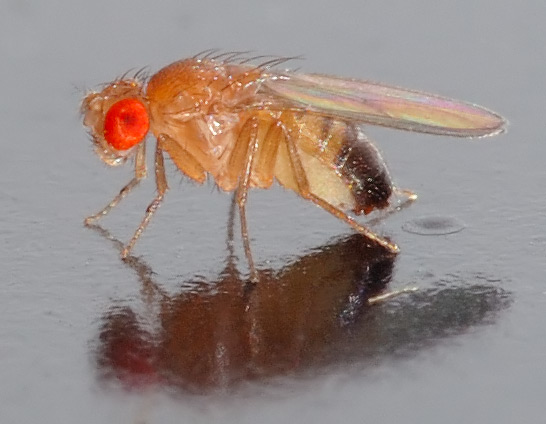 Cryptochrome, a light-sensitive protein present in human eyes has the ability to act as a sensor, detecting magnetic fields and subsequently acting as part of an internal navigation system. There is only one problem, while it is present in human eyes cryptochrome doesn’t help humans sense magnetic fields. New research has shown that the human protein can work as part of an internal navigation system, but in fly (Drosophila) eyes.

Researchers from the University of Massachusetts Medical School and Worcester Polytechnic Institute have demonstrated that the human cryptochrome protein CRY2 can restore magnetoreceptive ability in Drosophila individuals whose natural ability to sense magnetic fields has been damaged. Cryptochrome is a common protein, it is present in the eyes of birds, who are known to use their internal knowledge of magnetic fields to guide their flight.

In addition to showing that human CRY2 can restore magnetoreception in Drosophila, the researchers, led by neurobiologist Lauren Foley, also found that CRY2, unlike other forms of cryptochrome, is sensitive to blue light. It only restored the abilities of Drosophila when the flies were bathed in this light.

The experiments show that CRY2, a human eye protein, can act as a magnetic sensor. But only out of its native environment. In its native environment, CRY2 undoubtedly acts differently, due partially to the fact that it is only one component needed for an internal navigation system. To successfully detect magnetic fields an organism requires an apparatus that processes changes in the  cryptochrome, and communicate those changes to the brain. Drosophila obviously has such an apparatus, but whether humans do is doubtful.

So if it isn’t used for magnetoreception, why then do humans have cryptochrome proteins in their eyes? In addition to magnetoreception the protein is known to play a role in the regulation of circadian rhythms, the so called “body clock” in humans and other species.

The field of human magnetoreception has lost credibility since the 1980’s, when pioneering experiments by University of Manchester researcher Robin Baker that suggested human magnetoreception was a real phenomenon failed to be replicated. While the current scientific consensus is that humans can not sense magnetic fields, there is a long list of species that do including, bats, turtles, ants, mole rats, sharks, and rays.

Foley’s research, which was published in Nature Communications, may revive interest in the idea of magnetoreception in humans, suggesting that perhaps it is just the mechanism by which humans sense magnetic fields that is not understood. Magnetoreception is one of the hardest animal senses to study because it is not linked to a typical information gathering mechanism like the nose or ears.

What’s more, while some animals use their magnetic sense for navigation, humans obviously don’t have such abilities or else no one would go around in circles when lost in the woods. So while CRY2 alone doesn’t allow humans to sense the earth’s magnetic fields, it does in Drosophila, suggesting that more research to understand magnetoreception, in both humans and other animals, is needed.

(via Not Exactly Rocket Science and The BBC)